Astronomers are Bulging with Data

For the first time, over 250 million stars in our galaxy’s bulge have been surveyed in near-ultraviolet, optical, and near-infrared light, opening the door for astronomers to reexamine key questions about the Milky Way’s formation and history. Using ultraviolet data, and with 450,000 individual images, the team was able to measure the chemical composition of tens of thousands of stars spanning a large area of the bulge. The vast dataset can be explored in spectacular detail in this image.

The mysteries of the Milky Way are revealed in spectacular detail, thanks to the efforts of a team of astronomers who have observed 250 million stars in the bulge at the heart of the Milky Way using the Dark Energy Camera (DECam). DECam, primarily funded by the U.S. Department of Energy, is mounted on the Víctor M.Blanco 4-meter Telescope at the Cerro Tololo Inter-American Observatory (CTIO) in Chile, a program of NSF’s NOIRLab. By detecting the ultraviolet light from stars in the bulge known as Red Clump stars, they were able to analyze the chemical composition of over 70,000 stars over an area of sky 1,000 times as large as the full Moon (an area larger than 20 x 10 degrees stretching over the constellations Sagittarius and Scorpius).

The data are hosted and served to the community by NOIRLab’s Community Science and Data Center (CSDC), also a program of NSF’s NOIRLab, which handled the more than 7,000 DECam exposures, comprising more than 3.5 trillion pixels. A color-composite showing a main part of these data is shown in this image, and can be explored in all its whopping 50,000 x 25,000 pixels in this zoomable version.

The newly published study has shown that the stars near the very center of the Milky Way have a very similar composition, which suggests that they formed at around the same time. Normally composition is measured with a spectrograph, targeting a relatively small number of stars at a time (although the revolutionary DESI instrument at Kitt Peak National Observatory, a program of NSF’s NOIRLab, will soon be able to do thousands). However, the Blanco DECam Bulge Survey took a different approach and instead precisely measured the stars' brightness differences from ultraviolet to infrared wavelengths. These differences in brightness at different wavelengths are called photometric colors by astronomers, and can reveal the composition of stars when the dataset is calibrated with stars measured spectroscopically.

The team used DECam’s three square degree field of view to take over 450,000 individual images, before focusing on the subsample of 70,000 stars, which is substantially larger than previous spectroscopic bulge surveys. Future work with the full DECam data set will yield millions of composition measurements, a sample size more than 200 times that of even the largest spectroscopic surveys.

Kathy Vivas, co-author and NOIRLab astronomer said, “This is exactly the strength of the Dark Energy Camera — to undertake these kinds of studies. While it was originally aimed at the study of the distant Universe to measure its expansion, DECam has proven to be a powerful instrument to study our Milky Way as well.”

The survey results are providing key insights into the formation of the bulge and a glimpse of what is to come when the upcoming Vera C. Rubin Observatory begins acquiring its own images of the Milky Way. “Many other spiral galaxies look like the Milky Way and have similar bulges, so if we can understand how the Milky Way formed its bulge then we’ll have a good idea of how the other galaxies did too,” said study co-leader Christian Johnson of Space Telescope Science Institute.

These data would also surely have fascinated Víctor M. Blanco and his wife Betty Blanco, after whom the Blanco DECam Bulge Survey is named. Almost 50 years ago they used the same telescope to explore, amongst other things, the Milky Way’s bulge. Half a century later, our home galaxy has plenty of surprises to offer.

This research was presented in two papers which appeared in the journal Monthly Notices of the Royal Astronomical Society.

PR Image noirlab2027b
Center of the Milky Way with DECam 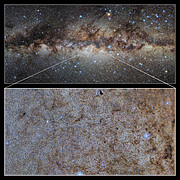 PR Image noirlab2027c
Close up on the Milky Way’s Bulge 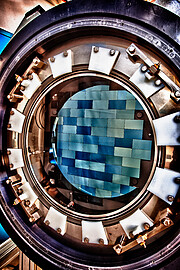 PR Video noirlab2027b
Zooming to the Center of the Milky Way

PR Video noirlab2027d
Zooming to the Center of the Milky Way