The naked-eye Pleiades star cluster has long been known to professional and amateur astronomers for the striking visible nebulosity that envelopes the cluster’s brightest stars, scattering their light like fog around a streetlamp.

Radio and infrared observations in the 1980s established that this nebulosity results from a chance encounter by the young stars of the Pleiades with an interstellar cloud, rather than being caused by debris from the cluster’s formation. New data obtained at Kitt Peak National Observatory suggest that the Pleiades are actually encountering two clouds, giving rise to an extraordinary and previously unknown occurrence: a three-body collision in the vast emptiness of interstellar space.

This new perspective on the motion of interstellar gas near the cluster comes from high-resolution spectra obtained at an adjunct facility of Kitt Peak’s 2.1-meter telescope known as the Coudé Feed. The investigator was Richard White of Smith College in Northampton, MA, who worked in collaboration with students from Smith College and Amherst College.

“The idea of the Pleiades and one gas cloud in an interstellar train wreck already made this nearby cluster an especially interesting region for astronomers seeking to understand the details of physical and chemical processes in the interstellar medium,” White says. “The presence of a second cloud interacting with the first cloud and with the cluster creates a situation more like a three-car crash in a demolition derby, which makes the Pleiades altogether unique as natural laboratory.”

The time scale for the unfolding of the interstellar collisions in the Pleiades is several hundred thousand years. “That is good news for those who enjoy the magnificent color images of the Pleiades images that grace textbooks and coffee table books, which suffer no danger of obsolescence,” White says. “It is bad news for those who would like to see celestial fireworks unfolding from year to year.”

Known as the Seven Sisters for the seven stars said to be visible with the naked eye, the Pleiades (M45) consists of more than 500 stars roughly 100 million years old in a cluster located about 400 light-years from Earth.

Sodium atoms in gas found between Earth and the stars absorb two specific wavelengths of yellow starlight (the same wavelengths of yellow light emitted by low-pressure sodium streetlamps). Because of the Doppler effect (analogous to the shift in siren pitch produced when an ambulance is moving toward or away from a listener), the motion of the gas along our line of sight produces subtle shifts in the observed wavelengths.

In a paper published in the October 2003 Astrophysical Journal Supplement, White interprets the new observations of sodium atoms in the Pleiades region in the context of other recent observations of the Pleiades region. These observations include significant new optical images of the Pleiades from the Burrell Schmidt telescope on Kitt Peak, published earlier this year in the Astrophysical Journal by Steven Gibson of the University of Calgary and Kenneth Nordsieck of the University of Wisconsin, and radio maps of neutral hydrogen that formed part of Gibson’s doctoral thesis.

The orientation of features in the optical and radio imagery provides clues to gas and dust motions across the sky, which can be combined with the spectroscopically measured velocities from Kitt Peak to allow astronomers to reconstruct the three-dimensional configuration of the interstellar matter near the Pleiades.

The sodium absorption lines reveal that there always is one feature between Earth and the Pleiades stars, moving toward the cluster with a line of sight velocity of about 10 kilometers per second. White associates this feature with the Taurus-Auriga interstellar cloud complex, the bulk of which lies about 40 light-years to the east.

Toward some stars, however, there are two or more absorption features. White argues that a shock-wave from the collision between the Pleiades and gas associated with the Taurus-Auriga complex can account for splitting of one feature into three in some areas, primarily on the south and east sides of the Pleiades. However, the presence of an additional feature in the data, primarily on the west side and moving into the cluster at about 12 kilometers per second, defies understanding unless a second cloud also is converging on the Pleiades, he concludes.

The only previously known three-body collisions in interstellar space are inferred close encounters by a star and a neighboring binary or triple star system within a globular cluster or in the cores of galaxies.

Previously released images of the Pleiades from Kitt Peak that amply demonstrate the surrounding nebulosity are available in the NOAO Image Gallery.

Located southwest of Tucson, AZ, Kitt Peak National Observatory is part of the National Optical Astronomy Observatory, which is operated by the Association of Universities for Research in Astronomy (AURA), Inc., under a cooperative agreement with the National Science Foundation. 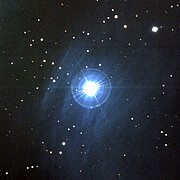