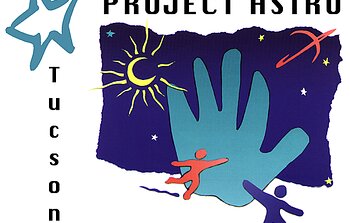 noao9910 — Organization Release
TUSD Students Join Authors and Astronomers in Solar Investigation
21 September 1999: Students in Susie Townsend's multi-age classroom at Miles Exploratory Learning Center, 1400 E. Broadway Blvd., will work with local astronomers and noted authors Joni Chancer and Gina Rester-Zodrow this Friday, September 24, at 10:00 am. Students will safely observe the Sun and then interpret their observations through art and writing invitations. Townsend's class will be studying the Sun and its impact on Earth throughout the school year using a multi-disciplinary, inquiry approach to learning. The Sun is entering the peak of an 11-year cycle of activity, making this a particularly exciting time to investigate solar behavior.
Read more

gemini9902 — Science Release
New Telescope Gives Astronomers a Clearer Vision of the Universe
25 June 1999: At a ceremony on Mauna Kea today, astronomers revealed some of the sharpest infrared images ever obtained by a ground-based telescope. These first high-resolution images from Gemini North reveal the remarkable power of the telescope's technologies, which minimize distortions that have blurred astronomical images since Galileo first pointed a telescope skyward almost 400 years ago. The clarity of these images is equivalent to resolving the separation between a set of automobile headlights at a distance of 2,000 miles!
Read more

noao9908 — Science Release
Gemini North Telescope Gives Astronomers a Clearer Vision of the Universe
25 June 1999: At a ceremony in Hawaii today, astronomers revealed some of the sharpest infrared images ever obtained by a ground-based telescope. These first high-resolution images from the new Gemini North Observatory show the remarkable power of the telescope's technologies, which minimize distortions that have blurred astronomical images since Galileo first pointed a telescope skyward almost 400 years ago. The clarity of these images is equivalent to resolving the separation between a set of automobile headlights at a distance of 2,000 miles!
Read more

noao9907 — Science Release
The Suns of M67
1 June 1999: Dr. Mark Giampapa of the National Science Foundation's National Solar Observatory in Tucson, Arizona, has determined that the Sun is in a relatively moderate state of activity. Giampapa's observations of Sun-like stars in M67 suggest that about 40% of the time the Sun is likely to be either significantly more, or significantly less, active. A change to either of these states is likely to cause significant changes in the Earth's climate. These same observations also indicate excursions in the luminosity of the Sun from about 0.2% - 0.5% are possible, compared with the 0.1% variations that have been measured with modern satellite instruments during the 1980s and 1990s. Any variation in what is considered typical or normal solar activity must be taken into account in the study of long-term behavior of the global climate.
Read more

noao9906 — Photo Release
Imaging the Universe with 3-D Holographic Gratings
31 May 1999: Dr. Samuel Barden, astronomer at the National Science Foundation's National Optical Astronomy Observatories in Tucson, Arizona, has partnered with Mr. Willis Colburn and Mr. James Arns at Kaiser Optical Systems, Inc. (KOSI), Ann Arbor, Michigan for the development of large format spectroscopic gratings using holographic technology for astronomical applications funded by the National Science Foundation through the Advanced Technologies and Instrumentation Program in the division of Astronomy. These new technology gratings can provide information at multiple regions of the spectrum simultaneously, with higher efficiency, less cost, and greater durability than the conventional grating technology that astronomers have relied on for over a hundred years.
Read more

noao9904 — Organization Release
Solis: Taking You to the (Solar) Max
31 May 1999: The National Science Foundation's National Solar Observatory is preparing for the upcoming solar maximum with SOLIS, a new suite of ground-based solar telescopes that will increase our understanding of solar activity and its effect on Earth's climate and atmosphere.
Read more

noao9903 — Science Release
"Rush to the Poles" Predicts Coming Solar Max
31 May 1999: The Sun is known to exhibit a maximum of activity, including solar flares and an increased number of sunspots and coronal mass ejections, approximately every 11 years. Dr. Richard C. Altrock announces today his prediction that the next solar maximum will occur between January and April of 2000 based on a new method employing daily observations of high latitude coronal activity. Dr. Altrock, an Air Force Research Laboratory astronomer at the National Science Foundation's National Solar Observatory (NSO) at Sacramento Peak, New Mexico, will present his result today to the American Astronomical Society meeting in Chicago, Illinois. This prediction is of interest to solar astronomers and others who design and operate satellites.
Read more

gemini9901 — Organization Release
Gemini Observatory Receives Funding to Take Mauna Kea Internet Access to New Heights
15 April 1999: The Gemini Observatory has received $600,000 from the National Science Foundation (NSF) to support a significant expansion of the internet connection speed between its Mauna Kea observatory, its Hilo headquarters in University Park, and the rest of the world. By coordinating the Gemini grant with a similar but different NSF grant recently made to the University of Hawaii's (UH) Information Technology Services, all of the Big Island observatories and UH-Hilo will share in the benefits of this much improved connection.
Read more 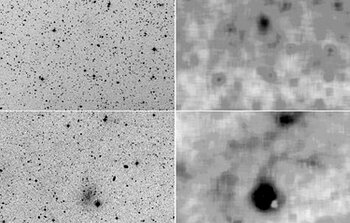 noao9901 — Science Release
Astronomers Discover New Galaxy in the Local Group
6 January 1999: Astronomers George H. Jacoby and Taft E. Armandroff of the National Optical Astronomy Observatories in Tucson, Arizona, and James E. Davies of The Johns Hopkins University announced today their discovery of a new galaxy in The Local Group, the group of galaxies within 4 million light-years of our own Milky Way. The new galaxy is the second one that the team has found in the past year by using new computer enhancement techniques applied to 10-year old photographs of the sky. Small galaxies of the type found by Jacoby and collaborators are the most common type of galaxy in the universe, yet the region around the Milky Way Galaxy's big brother, the spiral galaxy in Andromeda, had been thought to be highly deficient of these "dwarf" galaxies before the team began their search. The census of the Local Group, though, is now as high as 43 galaxies, meaning that our neighborhood may not be as unusual as was previously thought.
Read more
Showing 1 to 12 of 12
Usage of NOIRLab Images and Videos
Are you a journalist? Subscribe to the NOIRLab Media Newsletter.