Astronomers George H. Jacoby and Taft E. Armandroff of the National Optical Astronomy Observatories in Tucson, Arizona, and James E. Davies of The Johns Hopkins University announced today their discovery of a new galaxy in The Local Group, the group of galaxies within 4 million light-years of our own Milky Way. The new galaxy is the second one that the team has found in the past year by using new computer enhancement techniques applied to 10-year old photographs of the sky. Small galaxies of the type found by Jacoby and collaborators are the most common type of galaxy in the universe, yet the region around the Milky Way Galaxy's big brother, the spiral galaxy in Andromeda, had been thought to be highly deficient of these "dwarf" galaxies before the team began their search. The census of the Local Group, though, is now as high as 43 galaxies, meaning that our neighborhood may not be as unusual as was previously thought.

The newest member of the Local Group, named And VI (as the 6th dwarf galaxy candidate associated with the spiral galaxy in the constellation of Andromeda) is about 27 degrees on the sky south of the Andromeda Galaxy. This position places it about 900,000 light-years from the Andromeda Galaxy and 2.6 million light-years from Earth. And VI was identified as one of roughly 100 candidate Local Group dwarf galaxies by computer enhancement of a large region of the sky near Andromeda using the Digital Sky Survey (see figure below). To verify its nature as a galaxy, And VI was observed initially with the 4-m (158-inch) telescope at the National Science Foundation's Kitt Peak National Observatory near Tucson. Once the galaxy was confirmed as a likely Local Group member, it was studied in detail with the 3.5-m (138-inch) WIYN, also at the Kitt Peak National Observatory (see attached figure).

The two galaxies discovered by Jacoby, Armandroff and Davies, And V (upper pair of panels; shown as a negative image) and And VI (lower pair) were extremely difficult to identify. The lefthand images are from the Digital Sky Survey. The righthand images show how computer enhancement reveals these faint dwarf galaxies against the background of stars in our own Milky Way Galaxy. The dark regions in the center of the righthand panels are the signatures of the dwarf galaxy candidate. While And VI can be seen faintly in the original (lower left panel) before computer enhancement, And V is completely invisible to the eye (upper left panel). The technique used by Jacoby and collaborators promises to identify the faintest dwarf galaxies in the Local Group from existing Sky Survey photographs. Sidney van den Bergh (Dominion Astrophysical Observatory in Victoria, Canada) discovered the dwarf galaxies And I, II and III associated with the Andromeda Galaxy in 1972, but no additional dwarfs were found during the next 26 years. The identification of And VI as a new Andromeda dwarf, along with 2 others recently discovered (And V by Armandroff, Davies, and Jacoby last year, and Cas dSph by Karachentsev and Karachentseva this past summer), are vital clues to the way that galaxies and clusters of galaxies form.

The identification of some 30 additional dwarf galaxies are required in our Local Group to make the census of dwarf galaxies in our cluster of galaxies comparable to rich clusters of galaxies. Dwarf galaxies like And VI are thought by many to be the building blocks of bigger galaxies through a mechanism referred to as "cannibalism". If true, then the kinds of stars found in dwarfs should be reflected in the kinds of stars found in big galaxies. To test this hypothesis, Jacoby's team, as well as others (see the press release by Grebel and Guhathakurta at this meeting, paper 8.02; http://www.ucolick.org/~raja/pressrel.html) have been measuring the chemical compositions of the stars in the dwarfs around Andromeda.

Is our Local Group really special, or have astronomers not looked hard enough for these extremely faint and elusive galaxies? The recent discovery by Jacoby and his collaborators suggests that hard work may rectify the apparently unusual status of the Local Group. The team has another 65 candidate galaxies to check into; future work may reveal additional dwarf galaxies to add to the Local Group inventory over the next few years.

The National Optical Astronomy Observatories are operated by the Association of Universities for Research in Astronomy (AURA), Inc., under Cooperative Agreement with the National Science Foundation. 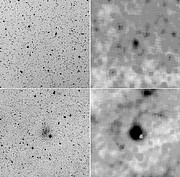