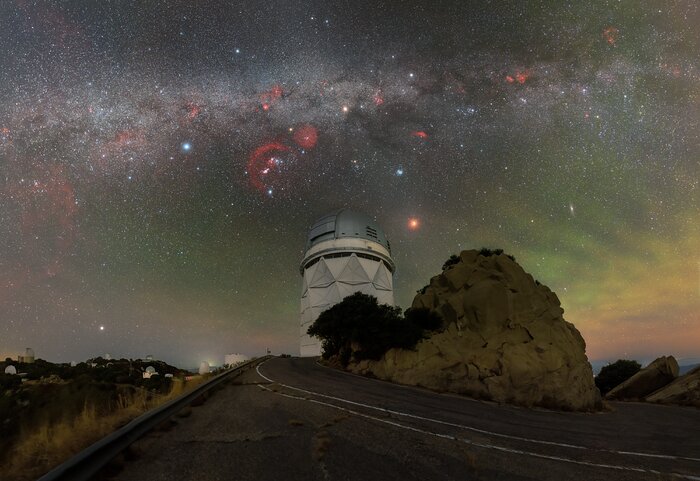 Next to the Nicholas U. Mayall 4-meter Telescope at Kitt Peak National Observatory, a Program of NSF’s NOIRLab, a total lunar eclipse crawls across the desert sky in the early morning hours of yesterday in this week’s Image of the Week. The Milky Way, dotted by star-forming regions, arches over the telescope (explore in the zoomable image).

This year, the typical two annual lunar eclipses were both total, something which hasn’t happened since 2018. You can see the other 2022 total lunar eclipse above Cerro Tololo International Observatory, another Program of NSF’s NOIRLab, in the Image of the Week here and in comparison shots here and a compilation of all 2022 lunar and solar eclipses here.

For a total lunar eclipse to occur, the Moon must enter the innermost part of the Earth’s shadow, the umbra. The Moon doesn’t align within the shadow every time it is full, but the orbits of the Earth and Moon are periodic. This means that lunar eclipses are predictable throughout time, in a roughly 18 year cycle known as the Saros series. Characteristics of the eclipse, like the type of lunar eclipse and where it will be visible on Earth, are known decades in advance. The next total lunar eclipse will happen in March 2025 — and it will be a special one for NOIRLab as the eclipse will be visible at every location where NOIRLab operates an observatory: Arizona, Hawai‘i and Chile.

Another close-up view of this total lunar eclipse can be found here, a 360-degree view to explore interactively here, a beautiful close-up timelapse videos of the eclipse here, a view of full duration of the eclipse here showing the "ozone fringe" in blue due to ozone absorption in the upper stratosphere of the Earth, a 20k fulldome view for planetariums here, and an all-sky timelapse video here.