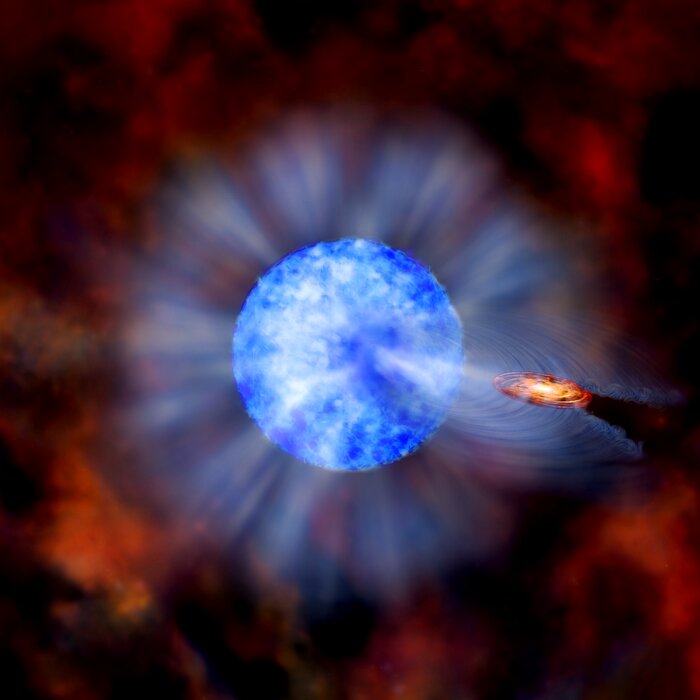 The main component of this graphic is an artist's representation of M33 X-7, a binary system in the nearby galaxy M33. In this system, a blue supergiant O7 star (large blue object) and a 16 solar mass stellar black hole, are revolving around their common center of mass in 3.45 days. This black hole is almost 16 times the Sun’s mass, a record for black holes created from the collapse of a giant star. Other black holes at the centers of galaxies are much more massive, but this object is the record-setter for a so-called "stellar mass" black hole.

The inset shows a composite of data from NASA’s Chandra X-ray Observatory and the Hubble Space Telescope. The bright objects in the inset image are young, massive stars around M33 X-7, and the bright, blue Chandra source is M33 X-7 itself. X-rays from Chandra reveals how long the black hole is eclipsed by the companion star, which indicates the size of the companion. Observations by the Gemini telescope on Mauna Kea, Hawaii track the orbital motion of the companion around the black hole, giving information about the mass of the two members of the binary. Other observed properties of the binary were also used to help constrain the mass estimates of both the black hole and its companion.