Observations that combine data from the ground-based Gemini North telescope and NASA’s orbiting Chandra X-ray observatory have led to the discovery of the most massive known stellar black hole.

Intriguingly, the black hole orbits an exceptionally large companion star, which by an extremely fortunate coincidence also eclipses the black hole from our perspective on Earth. As the only known eclipsing binary black hole/star pair the team was able to determine fundamental parameters of the pair with high precision. The ramifications of this pairing could have a profound effect on our understanding of how the largest stars evolve.

The black hole-star pair is located about 3 million light years from Earth in a neighboring galaxy named M33. The combination of X-ray data with Gemini North’s optical images and spectroscopy (see Figure 2) led the international team to conclude that the black hole is 15.7 times the mass of our Sun making it the most massive stellar black hole known.

Known as M33 X-7, the black hole orbits its over-sized companion in an orientation that creates an eclipse from our perspective on Earth every 3.5 days. The companion star weights in at about 70 times the mass of the Sun putting it near the top of the stellar weight limit.

To have such a large black hole partnered with such a portly “normal” star is an exceptional situation that will eventually result in a pair of orbiting black holes when the massive star eventually goes supernova. However, there is a challenge to understanding how a system like this could have formed. Since it is known that that more massive stars evolve more rapidly than less massive ones, the star that created the existing black hole in the pair must have already gone supernova, implying that it was even heavier than the 70 solar mass behemoth that remains in the system. This is puzzling since at that size the progenitor star of the black hole would have been large enough that it would have shared its atmosphere with its companion. Current theories of mass exchange between binary pairs lead to scenarios very different from what is seen in this system, meaning that how such an unusual binary formed will, for now, remain an enigma.

The result was announced in the October 18th issue of the British journal Nature. 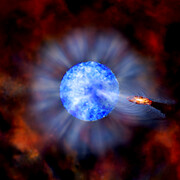 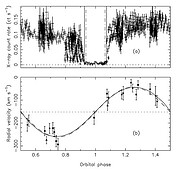