Mira stars, red giant variables that have been studied for 400 years, are generally half as large in diameter as had been believed, thanks to an opaque shell of water vapor and other molecules that surrounds them. A team including Steve Ridgway of NOAO used the IOTA interferometer on Mount Hopkins, AZ, to make this discovery. Read more in the Astronomy and Astrophysics press release, Forseeing the Sun’s Fate. 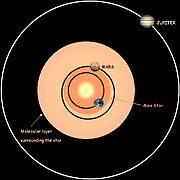