An international team led by Kambiz Fathi of the Rochester Institute of Technology (RIT) and Thaisa Storchi-Bergmann of the Instituto de Fisica in Porto Alegre, Brazil recently mapped the gas velocity field and structure within the circumnuclear ring of the SBb LINER/Seyfert 1 galaxy NGC 1097 in unprecedented detail. Using the Gemini Multi-object Spectrograph (GMOS) integral field unit (IFU) on Gemini South, in conjunction with HST/ACS observations, the team found clear evidence of radial streaming motions associated with spiral structures that extend to within ~10 parsecs (~33 lightyears) of the unresolved (<3.5 parsecs (<11.4 lightyears)) nucleus. These motions have been interpreted as evidence that a large-scale "fueling chain" transports gas from the outer regions of the galaxy's nucleus directly into the nuclear starburst and supermassive black hole.

Obtained on January 8, 2005, each of the Gemini two-dimensional spectroscopic observations covers a field of 5 x 7 arcseconds at a resolution of R ~3500. Three individual observations were used to create a final mosaic that covers the central 15 x 7 arcseconds of the galaxy's nucleus with a re-sampled spatial resolution of 0.1 x 0.1 arcseconds. A representative spectrum is shown in Figure 1. Reconstructed images using all of the spectra are shown in Figure 2.

Fathi presented the work at the January 2006 meeting of the American Astronomical Society in Washingon DC, and participated in a press briefing for journalists at the conference. In a press release from the Rochester Institute of Technology, Fathi states, “[This] is the first time anyone has been able to follow gas this close to the supermassive black hole in the center of another galaxy. The work of our team confirms the main theories that have never been observationally confirmed at this level. We have been able to show that it is possible to measure these velocities down to these scales.”

The observations were originally proposed by Thaisa Storchi-Bergmann as part of the Brazilian allocation of observing time on Gemini. Dr. Storchi-Bergmann has studied this galaxy for many years and is responsible for discovering evidence for its supermassive black hole in 1991. Other team members include Rogemar Riffel, also of the Instituto de Fisica, and Claudia Winge of the Gemini Observatory. David Axon and Andrew Robinson of RIT performed data analysis of the Gemini data with Dr. Fathi. Collaborators also include Alessandro Capetti (INAF, Turin), and Alessandro Marconi (INAF, Florence). 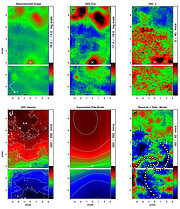