The Vera C. Rubin Observatory Legacy Survey of Space and Time (LSST) Camera team at SLAC National Accelerator Laboratory (SLAC) has released the first 3200-megapixel digital photo taken using the array of imaging sensors that will be integrated into the LSST Camera. This is the largest image ever captured in a single shot, and it is a successful test of the LSST Camera’s focal plane, which was completed at SLAC in January 2020.

Once operating at Rubin Observatory in Chile, the camera will produce panoramic images of the complete Southern sky — one panorama every few nights for 10 years. Its data will feed into the Rubin Observatory Legacy Survey of Space and Time (LSST) — a catalog of more galaxies than there are living people on Earth and of the motions of countless astrophysical objects. Using the LSST Camera, the observatory will create the largest astronomical movie of all time and shed light on some of the biggest mysteries of the Universe, including dark matter and dark energy. Vera C. Rubin Observatory and the Department of Energy LSST Camera will be operated by NSF's NOIRLab and SLAC.

The first lab image is so large that it would take 378 4K ultra-high-definition TV screens to display it at full size. To capture this photo without the fully assembled camera, the SLAC team used a 0.15-mm (0.005-inch) pinhole to project the image onto the focal plane, which is 60 cm (2 feet) wide. The LSST Camera focal plane contains 3.2 billion pixels, each about 0.01 mm wide [1], and the focal plane itself is extremely flat, varying by no more than a tenth of the width of a human hair. This allows the camera to produce sharp images in very high resolution across the entire field of view.

In the next few months, the LSST Camera team at SLAC will insert the cryostat with the focal plane into the camera body and add the camera’s lenses, shutter, and filter exchange system, making the world’s largest digital camera. By mid-2021, the SUV-sized camera will be ready for final testing before it begins its journey to Chile to be integrated in Rubin Observatory’s Simonyi Survey Telescope.

[1] The camera has an unprecedented 189-sensor mosaic of 4kx4k-pixel CCDs. A total of 3.2 billion pixels that can be read out in a staggering 2 seconds. 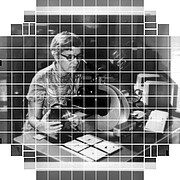 PR Video ann20013a
A video overview of the LSST Camera