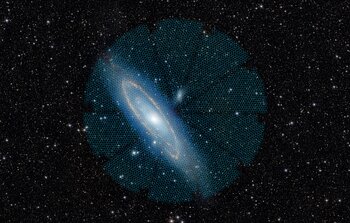 noirlab2117 — Organization Release
DESI Begins Creating 3D Map of the Universe
17 May 2021: A quest to map the Universe and unravel the mysteries of dark energy began officially today, 17 May 2021, at Kitt Peak National Observatory, a Program of NSF’s NOIRLab. Over the next five years, the Dark Energy Spectroscopic Instrument (DESI) will capture the light from tens of millions of galaxies and other cosmic objects. During its four-month trial run, which just concluded, the project already collected millions of observations.
Read more 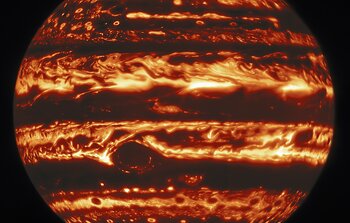 noirlab2116 — Photo Release
By Jove! Jupiter Shows Its Stripes and Colors
11 May 2021: Stunning new images of Jupiter from Gemini North and the NASA/ESA Hubble Space Telescope showcase the planet at infrared, visible, and ultraviolet wavelengths of light. These views reveal details in atmospheric features such as the Great Red Spot, superstorms, and gargantuan cyclones stretching across the planet’s disk. Three interactive images allow you to compare observations of Jupiter at these different wavelengths and explore the gas giant’s clouds yourself!
Read more 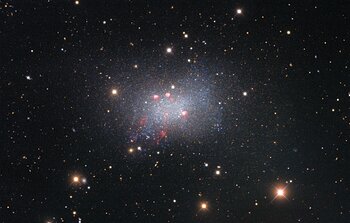 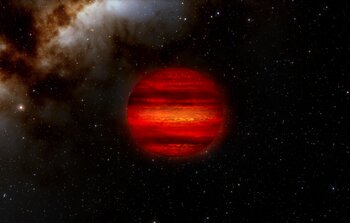 noirlab2114 — Science Release
Caught Speeding: Clocking the Fastest-Spinning Brown Dwarfs
7 April 2021: Astronomers at Western University have discovered the most rapidly rotating brown dwarfs known. They found three brown dwarfs that each complete a full rotation roughly once every hour. That rate is so extreme that if these “failed stars” rotated any faster, they could come close to tearing themselves apart. Identified by NASA’s Spitzer Space Telescope, the brown dwarfs were then studied by ground-based telescopes including Gemini North, which confirmed their surprisingly speedy rotation.
Read more 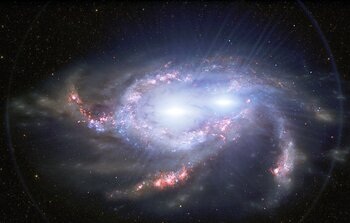 noirlab2113 — Science Release
Black Hole Pairs Found in Distant Merging Galaxies
6 April 2021: Astronomers have found two close pairs of quasars in the distant Universe. Follow-up observations with Gemini North spectroscopically resolved one of the distant quasar pairs, after their discovery with the Hubble Space Telescope and Gaia spacecraft. These quasars are closer together than any pair of quasars found so far away, providing strong evidence for the existence of supermassive black hole pairs as well as crucial insight into galaxy mergers in the early Universe.
Read more 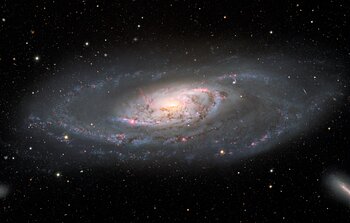 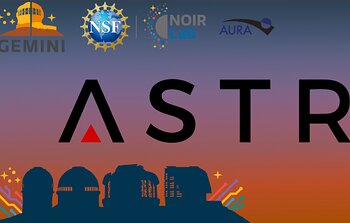 noirlab2111 — Organization Release
Explore the Universe during AstroDay–Chile
15 March 2021: AstroDay–Chile’s annual astronomy education festival will take place entirely online in Spanish for the first time in 2021, because of the COVID-19 pandemic. Since 2007, AstroDay has provided unique opportunities for the public to engage with the scientists and staff who work at the most important observatories in Chile. This year’s event takes place from 17 to 19 March 2021 and all activities are free to engage with online.
Read more 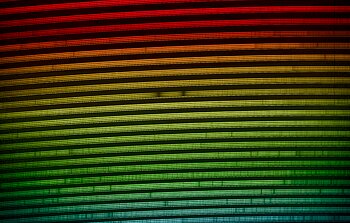 noirlab2110 — Organization Release
MAROON-X Embarks on its Exoplanet Quest
4 March 2021: Astronomers using the recently installed instrument MAROON-X on Gemini North have determined the mass of a transiting exoplanet orbiting the nearby star Gliese 486. As well as putting the innovative new instrument through its paces, this result, when combined with data from the TESS satellite, precisely measures key properties of a rocky planet that is ideal for follow-up observations with the next generation of ground- and space-based telescopes.
Read more 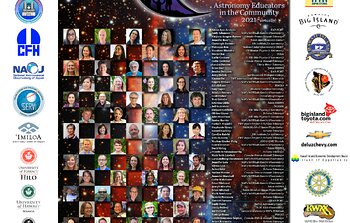 noirlab2109 — Organization Release
Journey Through the Universe 2021
22 February 2021: Journey Through the Universe — which, owing to the COVID-19 pandemic, will take place entirely online for the first time in 2021 — will share the wonders of the Universe and the possibilities of a career in science and technology with school students on Hawai‘i Island. This year’s iteration of the flagship astronomy education and outreach program is highlighted by a week of virtual educational programming from 1 to 5 March 2021.
Read more 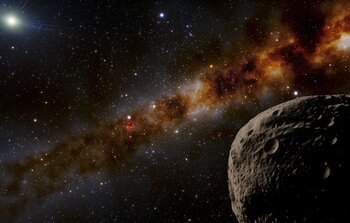 noirlab2108 — Science Release
Astronomers Confirm Solar System’s Most Distant Known Object Is Indeed Farfarout
10 February 2021: With the help of the international Gemini Observatory, a Program of NSF’s NOIRLab, and other ground-based telescopes, astronomers have confirmed that a faint object discovered in 2018 and nicknamed “Farfarout” is indeed the most distant object yet found in our Solar System. The object has just received its designation from the International Astronomical Union.
Read more 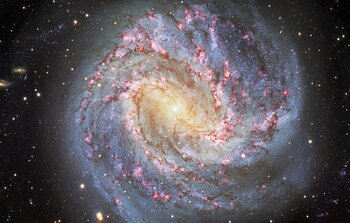 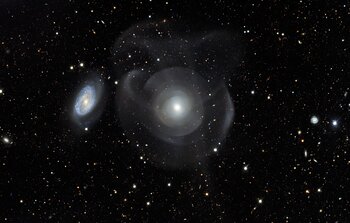 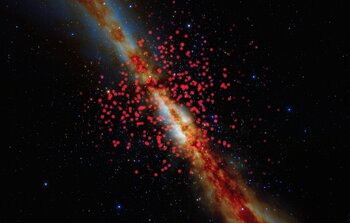 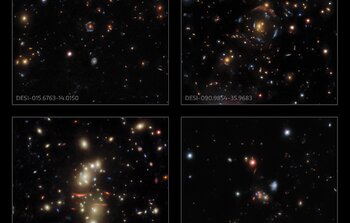 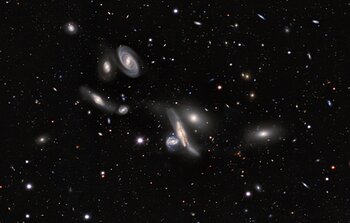 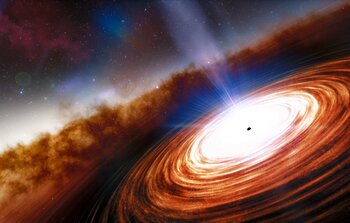 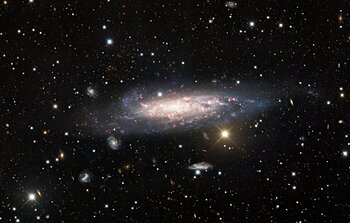 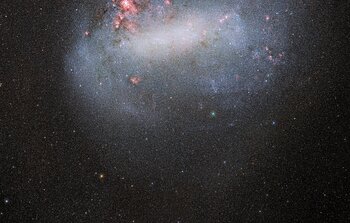 noirlab2030 — Photo Release
Dark Energy Camera Snaps Deepest Photo yet of Galactic Siblings
1 December 2020: Images from the Survey of the MAgellanic Stellar History (SMASH) reveal a striking family portrait of our galactic neighbors — the Large and Small Magellanic Clouds. The images represent a portion of the second data release from the deepest, most extensive survey of the Magellanic Clouds. The observations consist of roughly 4 billion measurements of 360 million objects.
Read more 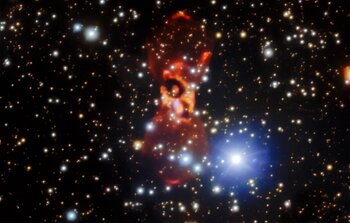 noirlab2029 — Science Release
Blast from the Past
24 November 2020: An international team of astronomers using Gemini North’s GNIRS instrument have discovered that CK Vulpeculae, first seen as a bright new star in 1670, is approximately five times farther away than previously thought. This makes the 1670 explosion of CK Vulpeculae much more energetic than previously estimated and puts it into a mysterious class of objects that are too bright to be members of the well-understood type of explosions known as novae, but too faint to be supernovae.
Read more 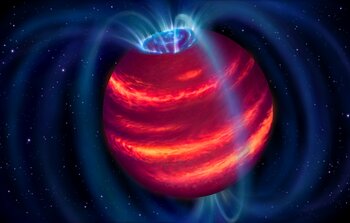 noirlab2028 — Science Release
Maunakea Telescopes Confirm First Brown Dwarf Discovered by Radio Observations
9 November 2020: A collaboration between the LOw Frequency ARray (LOFAR) radio telescope in Europe, the Gemini North telescope, and the NASA InfraRed Telescope Facility (IRTF), both on Maunakea in Hawai‘i, has led to the first direct discovery of a cold brown dwarf from its radio wavelength emission. Along with paving the way for future brown dwarf discoveries, this result is an important step towards applying radio astronomy to the exciting field of exoplanets.
Read more
Showing 1 to 20 of 431
Usage of NOIRLab Images and Videos
Are you a journalist? Subscribe to the NOIRLab Media Newsletter.