Gemini South, one of the world’s most productive and powerful optical-infrared telescopes, received a major capability boost with the successful installation of a new high-resolution spectrograph called GHOST constructed by an international consortium. This cutting-edge scientific instrument will expand our understanding of the earliest stars, the chemical fingerprints of distant planetary systems, and the formation and evolution of galaxies. Gemini South in Chile is one half of the International Gemini Observatory, operated by NSF’s NOIRLab.

The Gemini South telescope’s newest science instrument — GHOST, the Gemini High-resolution Optical SpecTrograph — achieved first light by making exquisite observations of HD 222925, a remarkably bright, chemically complex star located more than 1400 light-years away in the direction of the southern hemisphere constellation Tucana. This star is a prime example of the type of object that GHOST will investigate. Gemini South is one half of the International Gemini Observatory.

“This is an exciting milestone for astronomers around the globe who rely on Gemini South to study the Universe from this exceptional vantage point in Chile,” said Jennifer Lotz, Director of Gemini Observatory. “Once this next-generation instrument is commissioned, GHOST will be an essential component of the astronomers toolbox.”

Spectrographs are among the most important science instruments in all of astronomy. Unlike high-resolution cameras that capture amazing details of distant stars and galaxies, spectrographs precisely analyze the spectrum of light emitted by these objects, revealing detailed information about their chemical composition, motion and rotation, and ancient counterparts at the edge of the observable Universe.

GHOST, which has ten times the spectral resolution of GMOS, Gemini’s other major optical spectrograph, is the most sensitive high-resolution spectrograph across the full optical wavelength range of any of the spectrographs currently in operation on comparably-sized telescopes [1].

GHOST will also provide crucial follow-up observations of key targets emerging from many ongoing and future surveys, such as Vera C. Rubin Observatory’s Legacy Survey of Space and Time, SkyMapper, and GAIA. The instrument is open-access, meaning any researcher with a compelling science case will be able to submit proposals to use it for their research. NOIRLab will provide a data reduction pipeline for astronomers using the instrument.

Australian Astronomical Optics (AAO) at Macquarie University leads the GHOST team, which includes the National Research Council of Canada (NRC) Herzberg Astronomy and Astrophysics Research Centre which was responsible for the construction of the spectrograph, and the Australian National University (ANU), leading on the instrument control system and data reduction software.

The design and construction of GHOST began in 2010 and took ten years to complete. The instrument was delivered to Gemini South in early 2020, although COVID-19 restrictions meant that installation by the teams from Canada and Australia had to wait until early 2022. With its successful installation and first-light observations, the commissioning team put GHOST through its paces to verify its systems are performing as designed. Once the commissioning process is complete, it will join Gemini South’s diverse suite of advanced optical and infrared instruments and be offered to astronomers to use.

“The installation and commissioning have been a long time coming, but the team has been working efficiently and quickly”, said Steve Margheim, GHOST Project Scientist at NSF’s NOIRLab. “It was a really special day when we saw our first rainbow from the instrument”.

“With the successful commissioning of GHOST, NSF congratulates the instrument team on delivering to the international astronomy community enhanced capability to explore planets, stars, and galaxies," said Martin Still Gemini Program Officer at the National Science Foundation. "We eagerly await the new discoveries.”

It is expected that GHOST will be made available to the astronomical community during the first half of 2023.

[1] GHOST is an echelle spectrograph and consists of three primary components; the Cassegrain unit mounted on the telescope, the spectrograph bench located in the pier lab for image and wavelength stability, and a fiber cable connecting the two. 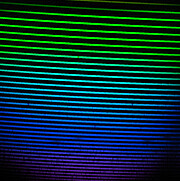 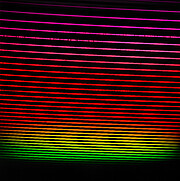 GHOST spectra with and without labels