By breaking down the light of an astronomical object into its component wavelengths, scientists can figure out what they’re made of. A new instrument named GHOST, 12 years in the making, has been installed on Gemini South telescope, operated by NSF’s NOIRLab, and will transform our understanding of cosmic chemistry.

GHOST’s first astronomical observation — known as ‘first light’ — was of the star HD 222925, which is located 1,400 light-years away in the southern constellation Tucana. HD 222925 has an unusual chemical composition, with a high proportion of heavy elements such as platinum, silver and thorium, which are produced through something called the r-process, which occurs when a star explodes as a supernova. The debris from a supernova was then recycled when HD 222925 formed.

There’s a new call to arms for astronomers seeking to study the Southern Hemisphere sky, with a powerful new spectrograph called GHOST, short for Gemini High Resolution Optical SpecTrograph. The instrument had its first light on 20 July on the Gemini South telescope in Chile. What’s more, it’ll soon be available to any astronomer with a brilliant idea to use.

So what does GHOST do? It’s not designed to take pretty pictures, or any kind of picture at all. More important to scientists are the spectra of astronomical objects. GHOST records these spectra by splitting the light from an astronomical object through an echelle diffraction grating. You may remember these from high school science classes — the grating acts to split white light into its component colors based on wavelength, like an extremely detailed rainbow, and the finer the grating, the narrower the wavelengths it can split the light into. 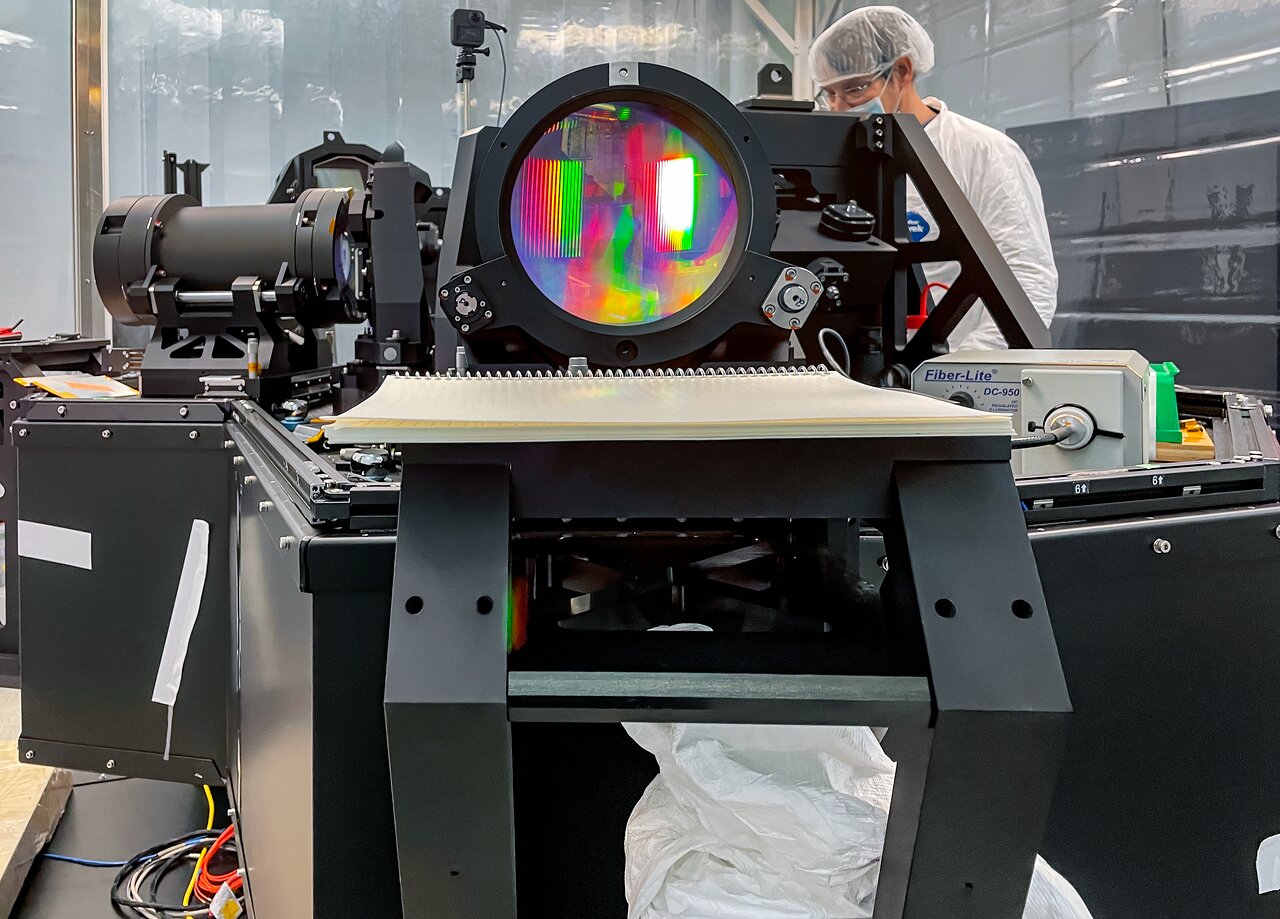 That’s why astronomers find astronomical spectra so important. If pictures paint a thousand words, then a spectra must paint a million words, because they are so packed with information.

GHOST is far more powerful, with 10 times the spectral resolution that GMOS has. This means it can break an object’s light into finer and finer wavelength bands. It’s like being able to see more and more subtle shades of colour in a rainbow.

Gemini South already has a popular spectrograph, called GMOS, the Gemini Multi-Object Spectrograph (in fact, there are two of these, with the other on Gemini North on Maunakea). GHOST is far more powerful, with 10 times the spectral resolution that GMOS has. This means it can break an object’s light into finer and finer wavelength bands. It’s like being able to see more and more subtle shades of colour in a rainbow.

GHOST saw first light in the early summer of 2022, twelve years after work first began on its design and construction. This was led by scientists at the Australian Astronomical Optics at Macquarie University, who worked with astronomers at the Herzberg Astronomy and Astrophysics Research Centre at the National Research Council in Canada, and the Australian National University. Alongside astronomers and engineers at NOIRLab, scientists across three continents were involved in getting GHOST from blueprint to telescope. 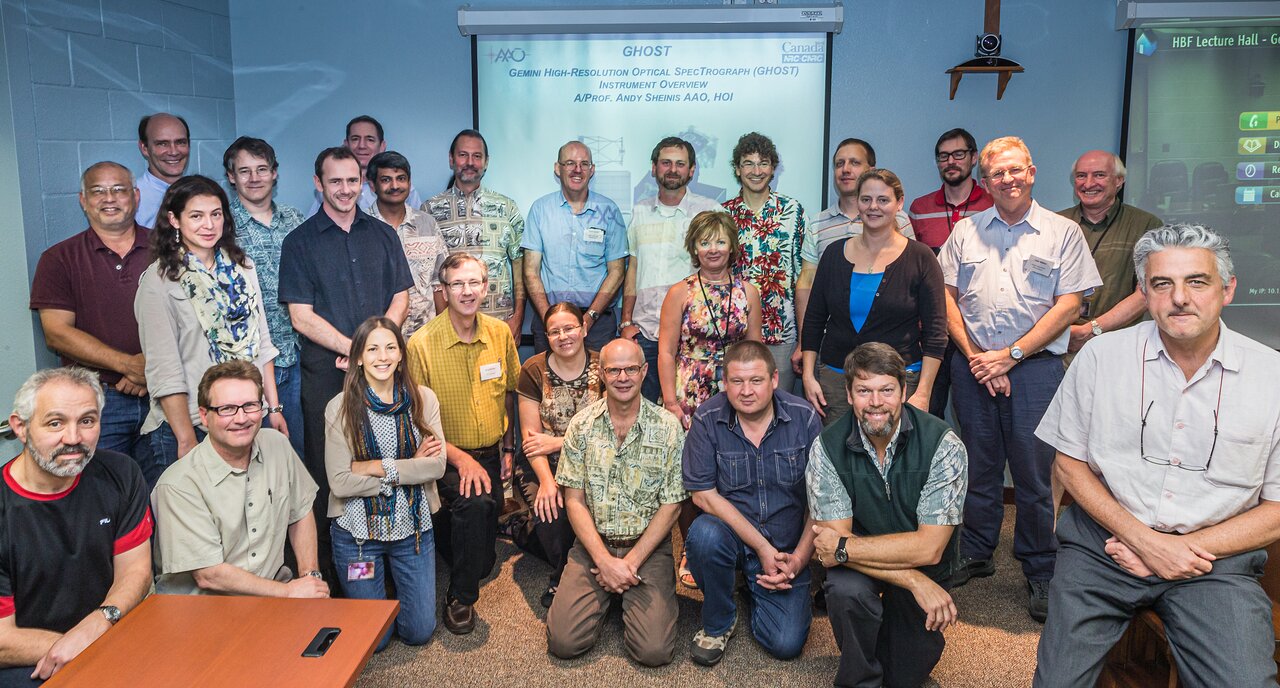 The GHOST team, led by researchers at the Australian Astronomical Optics at Macquarie University, are based on three continents.
Credit: Gemini Observatory/NSF/AURA/ illustration by Joy Pollard.

Now that GHOST is up and running, what specifically is it going to do? The answer to that question is, whatever projects astronomers can come up with! Typically, though, it will be spending its time doing two main things, either analysing the chemical properties of astronomical bodies, or measuring their Doppler shift.

In terms of the former, among GHOST’s early targets will be older stars with low abundances of heavy elements that could teach us about conditions earlier in the Universe, and younger stars with complex chemistry that could tell us about the processes that form precious elements such as gold and platinum. The abundance of each element will be laid bare in the spectrum that GHOST measures. Similar measurements will be made of globular star clusters, while dominant molecules in the atmospheres of some exoplanets will also be detectable by GHOST. With large-scale surveys rapidly becoming one of the most important parts of astronomy, projects such as the Legacy Survey of Space and Time on Vera C. Rubin Observatory will find thousands, even millions, of interesting objects for GHOST to follow up on.

Regarding the latter, the motion of an object can be clearly displayed in an object’s spectrum. This is because of the Doppler shift, the same phenomenon that causes an emergency vehicle’s siren to rise and fall in pitch as they race past. An object moving towards us will find the wavelength of its light gets compressed to shorter wavelengths — astronomers call this blueshift. Objects moving away see their light stretched to longer wavelengths, and this is called redshift. As exoplanets orbit their stars, they appear to move towards us and away from us around their orbit, and so their light gets blueshifted and redshifted, which causes absorption and emission lines in their spectrum to shift. GHOST is able to measure the motion of planets to a precision of 10 meters per second. That’s equivalent to detecting the motion of an Olympic sprinter in another star system. This will also allow astronomers to confirm the existence of exoplanets found by NASA’s Transiting Exoplanet Survey Satellite (TESS).

Typically, GHOST will be spending its time doing two main things, either analysing the chemical properties of astronomical bodies, or measuring their Doppler shift. 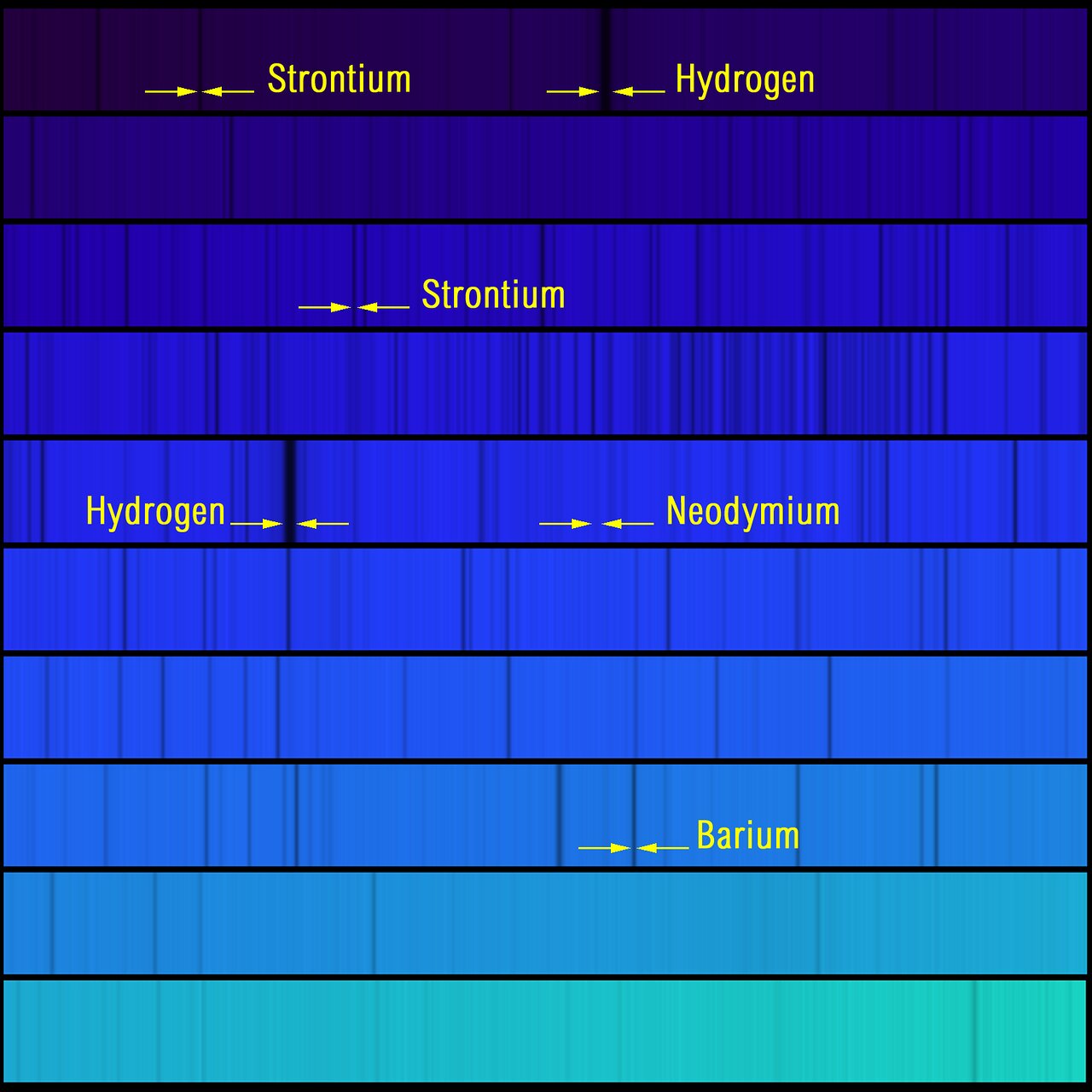 An example of a spectrum from a star, specifically HD126587. The black lines indicate where those molecules are absorbing light. GHOST will be able to measure even more detailed spectra
Credit: NOIRLab/NSF/AURA

GHOST is still in the process of completing commissioning, but after that, will be waiting to get started. A call for proposals is tipped to go out to astronomers all over the world during the first half of 2023, and after that, the sky’s the limit.