Big Astronomy or Astronomia a Gran Escala shares the story of the people and places who make big astronomy and big science happen. The planetarium show transports viewers to Chile where the dark skies and dry, remote setting create ideal conditions to observe the Universe. By 2022, it is expected that most of the world’s ground-based observing infrastructure will be located in Chile, and the US and other countries are investing billions of dollars in furthering astronomy partnerships in the country. Big Astronomy introduces audiences to the wide variety of people involved in advancing astronomical discovery.

The NOIRLab facilities in Chile featured in this extraordinary planetarium production are the Cerro Tololo Inter-American Observatory (CTIO) and the international Gemini Observatory. Other facilities featured are the Atacama Large Millimeter/submillimeter Array (ALMA) and Vera C. Rubin Observatory.

CTIO is home to 35 telescopes, located at an altitude of 2,200 meters (7,200 feet) atop Cerro Tololo in northern Chile. An icon of CTIO is the Víctor M. Blanco 4-meter Telescope, outfitted with the Dark Energy Camera. In Big Astronomy, NOIRLab staff, including electronics/detector engineer Marco Bonati, assistant observer Jacqueline Seron, and astronomer Kathy Vivas, describe their work at the telescope and with the Dark Energy Camera.

“Chile is one of the best places in the world for astronomy and we are privileged to have a presence in the country,” said Patrick McCarthy, Director of NOIRLab. “The Big Astronomy planetarium show captures in rich detail some of the people and the locations that make our work, and the work of other astronomical institutions, possible.” 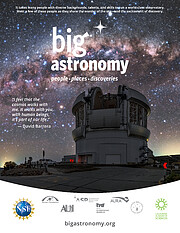