These orange swirls of dust are snapshots from the largest collection of sharp, detailed images of dusty debris disks around young stars — published this week by an international group of astronomers. The images — captured by the 8-meter Gemini South telescope using the Gemini Planet Imager — illustrate the variety of shapes and sizes that stellar systems can take during their infancy. Unexpectedly, the majority of these systems display evidence of planet formation.

These remarkable portraits of dusty disks are a selection from 26 new images of debris disks obtained by the Gemini Planet Imager (GPI) at the international Gemini Observatory, a Program of NSF’s NOIRLab. These images highlight the diversity of shapes and sizes that these disks can take and show the outer reaches of exoplanetary systems in their formative years. The young stars imaged, which range from tens of millions to a few hundred million years old, are at the ideal age to settle down and raise planets. The forming planets sculpt the dust disk and leave behind gaps and warps that are indirect clues to their existence and motion.

While debris disks have been imaged before, this new cohort of 26 disks represents one of the largest samples to be imaged with highly uniform data quality. This enables detailed comparison of the observations, a unique breakthrough in debris disk surveys. Thirteen of the disks form a perfect natural laboratory, all belonging to the Scorpius–Centaurus stellar association, roughly 400 light-years from Earth. The group of stars, which were born in the same region at roughly the same time, enables astronomers to compare the architectures of a variety of young planetary systems developing under different conditions.

GPI was able to capture these dusty disks with the help of some ingenious astronomical engineering. GPI is sensitive to the polarization of light, allowing it to distinguish dust-scattered light, which is polarized, from the unpolarized light emanating from the stars. This gives GPI the impressive ability to improve the contrast of images and capture disks that are 10 million times fainter than their parent stars. Measuring polarization is only one of GPI’s tricks, however — the instrument also exploits a coronagraph and adaptive optics to get the most from its observations [1][2].

GPI’s precision is in large part due to its perch on the 8-meter Gemini South telescope on Cerro Pachón in Chile. The dry conditions, high altitude, and dark skies are perfect for cutting-edge astronomical research. By combining this exquisite location with some engineering ingenuity, GPI is able to capture images as sharp as those from the Hubble Space Telescope — and detect objects up to three times closer to the host stars [3].

GPI’s first-rate observing abilities enabled this work, part of the Gemini Planet Imager Exoplanet Survey (GPIES), a 4-year search for light emitted by giant gas planets orbiting more than 500 of the youngest stars near the Sun. As well as doubling the number of debris disks imaged at this high resolution, the survey uncovered six giant exoplanets and four brown dwarfs. Surveys such as GPIES are a perfect way to screen targets for the next generation of space- and ground-based telescopes.

“The Gemini instrument program continues to provide unique science opportunities. This combination of GPI mounted upon a large ground-based telescope is delivering exciting new details about the process of how planets form,” said Martin Still, NSF Program Manager for the Gemini Observatory partnership.

The GPIES survey concluded in 2019, but the investment and technical capability of the Gemini Planet Imager will continue with an upgrade to GPI’s hardware to improve its resolution and sensitivity [4]. The new “GPI 2.0,” is slated for a future installation at Gemini North atop Maunakea in Hawai‘i, where it will search the less-observed northern hemisphere skies for more exoplanets and debris disks. GPI 2.0 will also continue the work of scouting out targets for the next generation of exoplanet missions, setting the scene for new insights into the mystery of planet formation.

[1]Coronagraphs are devices which block light coming directly from a central star, allowing the faint disk to be seen. The presence of GPI’s coronagraph can be inferred from the conspicuous black circle at the center of these images.

[2]Adaptive Optics is a cutting-edge astronomical technique that uses deformable mirrors to correct blurring and distortions caused by turbulence in Earth’s atmosphere.

[3]GPI’s coronagraph blocks a smaller region around the star and better suppresses noise at small angular separations from the star, compared to HST’s coronagraph.

[4]The upgrade to GPI is funded by the NSF and by the Heising-Simons Foundation.

This research was presented in the paper Debris Disk Results from the Gemini Planet Imager Exoplanet Survey’s Polarimetric Imaging Campaign in The Astronomical Journal. 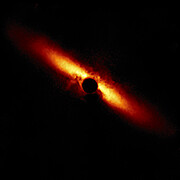 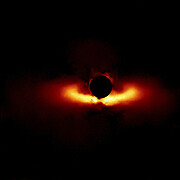 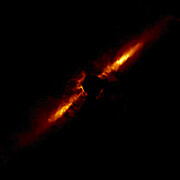 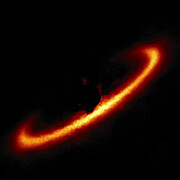 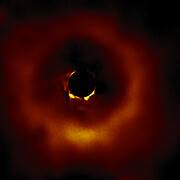 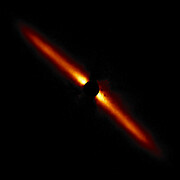