Using the Dark Energy Camera at Cerro Tololo Inter-American Observatory, a Program of NSF’s NOIRLab, astronomers are measuring weak gravitational lensing to map the distribution of mass in nearby galaxy clusters. As well as producing remarkable images like this one, the information will shed light on the relationships between the constituent parts of nearby galaxy clusters, such as gas, stellar populations, and dark matter.

The galaxy cluster Abell 3827 is the subject of this striking image. In addition to featuring a field of galaxies and foreground stars, the image is overlaid with a map with hues of red, blue and purple. Though they are attractive, these colors aren’t for decoration — they represent the distribution of mass in the heart of Abell 3827 with red showing the largest mass concentration.

Galaxy clusters are massive conglomerations of hundreds or even thousands of galaxies, bound together by their mutual gravitational attraction. They are among the most massive astrophysical objects known, weighing thousands of times as much as the Milky Way, and they contain vast amounts of high-temperature intergalactic gas and dark matter.

This image is a snapshot from the Local Volume Complete Cluster Survey (LoVoCCS), a survey program investigating 107 nearby galaxy clusters. LoVoCCS takes advantage of an astrophysical phenomenon called weak gravitational lensing to measure the mass and matter distributions of these clusters.

By averaging the tiny distortions of the many background galaxies visible in this image, the LoVoCCS team were able to create a detailed map of Abell 3827’s mass distributions. These measurements — and those from the other galaxy clusters in the LoVoCCS survey — will allow astronomers to shed light on the relation between the stellar populations, gas, and dark matter in nearby galaxy clusters.

To gather the information required for the survey, the LoVoCCS team are using the Dark Energy Camera (DECam), a high-performance instrument mounted on the Victor M. Blanco 4m telescope at Cerro Tololo Inter-American Observatory (CTIO). Originally built by DOE to undertake the Dark Energy Survey, DECam now supports a wide variety of astronomical programs, both large and small. Read more about LoVoCCS in the latest edition of NOIRLab’s newsletter, The NOIRLab Mirror.

[1] Strong gravitational lensing can produce conspicuous arcs, rings, and even celestial doppelgängers. The first gravitationally lensed object to be detected, the Twin Quasar, appears in duplicate as a result of the lensing effect of an intervening galaxy. 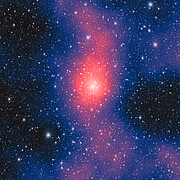 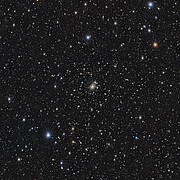