NOIRLab releases best view yet of a neighboring dwarf galaxy

Barnard’s Galaxy, a dwarf galaxy neighboring the Milky Way, is revealed in this stunning image from the Victor. M. Blanco 4-m telescope at the Cerro Tololo Inter-American Observatory, a program of NSF’s NOIRLab. The image reveals regions of intense star formation and a scattering of immense cosmic bubbles.

Picture a galaxy, and often all that springs to mind are majestic spiral galaxies like the Andromeda Galaxy or the Milky Way — but as the example in this image illustrates, galaxies come in a wide variety of shapes and sizes. This image depicts the irregular dwarf galaxy Barnard’s Galaxy, also known as NGC 6822. Barnard’s Galaxy is one of the Milky Way’s closest neighbors, lying only 1.6 million light-years away in the constellation of Sagittarius. Diminutive by galactic standards, it is barely a tenth of the diameter of the Milky Way and more than a thousand times less massive.

Despite its small size, the galaxy contains some spellbinding cosmic objects. Glowing pink clouds of gas are scattered throughout Barnard’s Galaxy, and indicate that rapid star birth is widespread. Several other regions are well known in their own right — the objects nicknamed the Ring Nebula and the Bubble Nebula can both be found within Barnard’s Galaxy (not to be confused with the objects of the same names elsewhere in the sky), and have been well-studied since they were first detected by Edwin Hubble in 1925. These two nebulae are sculpted by intense stellar winds, and can be seen side-by-side — to the upper-right of the heart of Barnard’s Galaxy.

This deep image was captured using the MOSAIC2 camera on the Victor M. Blanco 4-meter telescope at the Cerro Tololo Inter-American Observatory (CTIO) in the Chilean Andes mountains. At an altitude of 2200 meters (7200 feet) and situated in one of the driest regions on Earth, CTIO is perfectly situated to make captivating observations such as this. The site, which is operated by NOIRLab, hosts more than 15 active research telescopes, providing observational access to the southern celestial hemisphere for astronomers in the US and worldwide. 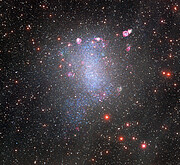