The discovery of the acceleration of the universe by two teams of astronomers using the National Science Foundation's (NSF) National Optical Astronomy Observatories (NOAO) was named by the journal Science as the top scientific research advance of 1998.

Working independently, the two groups have concluded that we live in a universe that will expand forever under the influence of an as yet unknown driving force. The expansion of the universe from the initial Big Bang has been known for decades. Gravitational attraction between galaxies should, however, slow the expansion and, if the universe contains sufficient matter, eventually stop or even reverse the expansion. The findings of these two research groups indicate that the universe does not contain enough matter to stop the expansion and, more surprisingly, that the expansion is speeding up. Observations from the NSF's Cerro Tololo Inter-American Observatory (CTIO) proved to be the key to success for these investigators.

What Albert Einstein referred to as his "biggest blunder" may be the driving energy of the accelerating universe. Early in this century, Einstein proposed that the universe had an unknown, pervasive energy that was required to stop the universe from collapsing under its own gravity. He concluded that he had blundered and that this cosmic repulsion was unnecessary when universal expansion was discovered a decade later, expansion we now identify with the Big Bang explosion. Einstein may have been right after all.

The international groups, the High-Z Supernova Search Team led by Brian Schmidt (Mt. Stromlo and Siding Springs Observatories) and the Supernova Cosmology Project directed by Saul Perlmutter (Lawerence Berkeley Laboratories), used the Blanco telescope at CTIO in Chile to discover supernovae in very distant galaxies and used these supernovae as distance measures to the galaxies.

Supernovae are exploding stars whose brightness increases tremendously to rival that of the parent galaxy. The importance of supernovae to cosmology is that they can be used to measure the distance to galaxies. Through calibration work by astronomers from CTIO and the University of Chile, the rate at which the apparent brightness of the supernova decreases with time can be used to set its intrinsic brightness and thus the distance to the supernova. The supernova distance and its redshift-the apparent speed it is moving away from us-are used to measure the matter density of the universe and Einstein's cosmic repulsion. Until the work of these two groups, the cosmic repulsion was assumed to be zero.

CTIO's Nicholas Suntzeff, co-founder of the High-z Supernova Search Team, concludes, "What we have found is that there is a 'dark force' that permeates the universe and that has overcome the force of gravity. This result is so strange and unexpected, that it perhaps is only believable because two independent international groups have found the same effect in their data."

Supernovae have long been recognized to be potential distance indicators in the universe and searches for them were carried out with limited success for more than a decade. Observations from Cerro Tololo enabled the breakthrough and nearly all of the supernovae analyzed for this important discovery were identified at CTIO. Weather and superb image stability were the critical factor in discovering and tracking the brightness of distant supernovae. Cerro Tololo, located in the foothills of the Andes, is very clear (greater than 80% perfectly so) during the Chilean summer. The Big Throughput Camera-a large format CCD imager developed by J.Anthony Tyson (Lucent Technologies) and Gary Bernstein (U. Michigan) for CTIO, with a unique capability to image in one exposure an area on the sky as big as the full moon-was the second critical component in discovering supernovae. For example, the BTC was used by the Supernova Cosmology Project to discover 17 very distant supernovae in 2 nights in December 1997.

Saul Perlmutter said, "The CTIO 4-m provided the perfect place to do this research; once we got there, everything became easy."

Supernovae are identified by observing dozens of fields on the sky with the CTIO Blanco telescope at new moon when skies are darkest. The same fields are imaged a month later and then compared to supernovae as new stars not present in the first image. Each field contains thousands of very distant galaxies, a few of which will have a supernova at any given time.

After the identification of the supernova, follow-up photometry and spectroscopy must be made over several months to measure the rate of decline in brightness and to determine the redshift of the galaxy. The two teams arrange follow-up observations at telescopes around the world. Most telescopes, however, are scheduled for blocks of specific programs well in advance and are not easily diverted to this type of observation. The WIYN telescope at the NSF's Kitt Peak National Observatory near Tucson, Arizona played a critical role with its innovative "queue scheduling", where images and spectra of batches of supernovae could be interleaved at short notice during a night with observations of other programs.

Sidney Wolff, NOAO Director, says "These investigations are an excellent example of how innovations in both instrumentation and telescope scheduling at the National Observatories enable major scientific advances."

Science is a leading peer-reviewed general science journal published by the American Association for Advancement of Sciences. A draft of their press release and of the "Breakthrough of the Year" article is available, under embargo, from the AAAS News & Information Office.

Editors: This press release, including a high resolution version of the image, is available electronically over the Internet via http://www.noao.edu/

Cerro Tololo Inter-American Observatory and Kitt Peak National Observatory are divisions of the National Optical Astronomy Observatories (NOAO). NOAO is operated by the Association of Universities for Research in Astronomy (AURA), Inc., under cooperative agreement with the National Science Foundation. 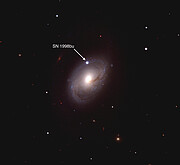 PR Image noao9810a
Supernova 1998bu in the nearby spiral galaxy