Two teams of astronomers searching for signs of other solar systems with telescopes in Chile and Hawaii have independently discovered a disk around a nearby star that may be forming--or may have already formed--planets.

The disk of dust, about three times the size of Pluto's orbit around the Sun, surrounds a star roughly 220 light-years from Earth, which, according to some theories, has the right age to be forming planets now. Like the majority of stars in our galaxy, this object is a member of a binary system, suggesting that the presence of a companion star does not necessarily disrupt a disk before it has had enough time to form planets.

The joint discovery was made by one team comprised of Ray Jayawardhana, Lee Hartmann, and Giovanni Fazio of the Harvard-Smithsonian Center for Astrophysics in Cambridge, Massachusetts, and Scott Fisher, Charles Telesco, and Robert Pina of the University of Florida in Gainesville, which used the National Science Foundation's 4-meter Blanco Telescope at the Cerro Tololo Inter-American Observatory in La Serena, Chile; and by a second team comprised of David Koerner, Michael Ressler, and Michael Werner of CalTech/Jet Propulsion Laboratory and Dana Backman of Franklin & Marshall College, which used the 10-meter Keck II Telescope on Mauna Kea, Hawaii.

The newly-discovered disk surrounds a star known to astronomers as HR 4796A in the southern constellation Centaurus. HR 4796A is roughly 20 times more luminous than the Sun and a few times more massive. It is separated from its faint companion, dubbed HR 4796B, by about 500 Astronomical Units. (An Astronomical Unit, or AU, is the distance between the Sun and the Earth, roughly 150,000,000 kilometers or 93,000,000 miles.) The disk itself appears to be roughly 250 AU across, and is seen nearly edge-on in images taken at wavelengths in the mid-infrared part of the spectrum. "What's most exciting is that we are looking at a disk just at the time it is forming planets or has recently done so," says Jayawardhana, who found the disk while making observations for his PhD thesis.

This disk may be a close cousin of the disk around the star Beta Pictoris that astronomers have known about for 14 years. Beta Pictoris is estimated to be about 200 million years old whereas the HR 4796 pair is only about 10 million years in age. "Unlike the case of Beta Pictoris, we know the age of this star pretty well, and it seems perfect for planets to be forming in its disk," Jayawardhana explains.

"From previous work by Michael Jura at UCLA and colleagues, it was known that the primary star was surrounded by a dust cloud with a hole in it," according to Hartmann. "Our images show that the cloud is indeed a disk, so that the hole could be cleared out by the gravity of one or more inner planets."

Hartmann, author of a soon-to-be-released textbook on star formation, adds "This discovery could also tell us about how binary companions affect disks. Perhaps this disk is truncated on the outside at a radius of about 125 AU because of the companion star's gravity." A true test of this idea will require better measurements of the companion's orbit.

The HR 4796A disk was first seen in images taken at 20 micrometers, a wavelength in the mid-infrared part of the spectrum. (20 micrometers is about 40 times the wavelength of visible light.) The images were obtained with a state-of-the-art mid-infrared array camera, known as OSCIR, built at the University of Florida.

"The new generation of mid-infrared detectors is what made this discovery possible," says Telesco, who built the camera. Advanced detector chips, like the one used in OSCIR, are a recent innovation that has made it possible for astronomers to make observations in this relatively unexplored part of the spectrum. "These sensitive cameras, when used on the world's best telescopes, will lead to an explosion of new results as exciting as the HR 4796A disk," Telesco predicts.

Hugh Van Horn, Director of NSF's Division of Astronomical Sciences, comments that "Numerous discoveries of extrasolar planetary systems have shown that we have much to learn about the process of planet formation. The exciting new observations by the Harvard/Florida team working at CTIO -- and by their colleagues at the Keck Observatories -- will certainly help to advance our understanding of the planet-forming process. The new work by these two teams provides a significant contribution to 'origins research' supported cooperatively by NSF and NASA and illustrates the strength of the U.S. system of national and independent observatories for astronomical research."

The research of both teams was supported in large part by the NASA Origins Program, with additional support to the CfA/Florida team from NSF, NOAO, and the Smithsonian Institution.

Representatives of both groups will describe the discovery and its interpretation at a press conference at 11:00 am EDT, Tuesday, April 21, at NASA Headquarters, Washington, DC. 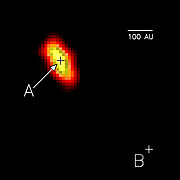