Astronomers are announcing today the discovery of an extraordinary number of the most massive stars yet known, all concentrated within a single cloud of gas in a nearby galaxy. A conservative estimate by astronomers Dr. Phil Massey of the National Optical Astronomy Observatories (NOAO) in Tucson, AZ, and Dr. Deidre Hunter from Lowell Observatory in Flagstaff, AZ, places over a dozen stars more massive than 100 times the mass of the Sun within this one cluster. The most massive star may be 150 times the mass of the Sun, making it the most massive star yet found. In addition, the processes that control starbirth in this young, dense star cluster seem to be identical to star formation processes ongoing in more common, less dense star forming regions. The discovery leads astronomers to postulate we haven't yet encountered a physical limit to how massive a star can form in nature.

The cluster of massive stars lies within a region known as R136, an extremely populous star cluster at the heart of the 30 Doradus nebula, a giant H II region in the Large Magellanic Cloud about 50 kpc (163,000 light years) from the Sun. R136 is an extremely young star cluster, between one and two million years old. Massey and Hunter used the Faint Object Spectrograph (FOS) on the Hubble Space Telescope (HST) to obtain spectra of 65 of the brightest blue stars in R136. Analysis of these spectra indicates temperatures of about 50,000 degrees Kelvin, which means these stars belong to spectral type O3, the hottest, most luminous, and most massive subclass of stars. In fact, this work identified more O3 stars in this one region than were previously known in all of the rest of the Universe. Hunter comments "R136 is certainly remarkable and may even be an illustration of starbursts observed in more distant galaxies. However, the immediate importance of R136 is that it is the only cluster of its kind close enough for us to see the full inventory of individual stars."

Before the high-resolution capability of the Hubble Space Telescope, astronomers thought R136 might contain a single, supermassive star. HST images have revealed more than 3500 stars in the core of R136, leading astronomers to speculate it may be a globular cluster in its infancy. The work of Massey and Hunter investigates the star formation history of this extremely populous cluster, the only one of its type close enough to be studied directly. They find even in the extremely crowded conditions of R136, the number of stars formed when grouped by mass follows the same pattern as found in more common, less dense star forming regions in our own galaxy. An important finding is that the distribution of stars by mass is the same in R136 as in more typical star forming regions. The large number of massive stars may simply be a consequence of the fact that this star forming region contained exceptionally large amounts of gas and dust to start with. Massey finds this to be very exciting and concludes, "we haven't yet encountered a physical limit to the mass of stars. Any limits we have seen are a result of statistics, not physics."

Massey and Hunter will continue this work in late January 1998 using the HST Space Telescope Imaging Spectrograph (STIS) to determine more accurately the temperature and mass of the highest mass stars in R136. A scientific paper on this work appears in the January 20, 1998, issue of the Astrophysical Journal. Support for this work was provided by NASA through grant number GO-06417.02-95A from Space Telescope Science Institute. 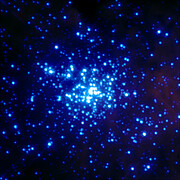 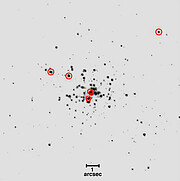