This image of a planetary nebula, which may suggest a rose to some, was obtained with the wide-field view of the National Optical Astronomy Observatory (NOAO) Mosaic 1 camera on the Mayall 4-meter telescope at Kitt Peak National Observatory.

The image was generated by Travis Rector (University of Alaska Anchorage) from observations taken through four different filters which are assigned colors that approximate what the human eye can see: B (blue), I (orange), Hydrogen-alpha (red) and Oxygen [OIII] (blue) filters. In this image, North is up, East is to the left. 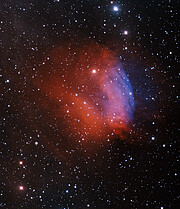