WIYN/NOAO: A Panoramic Loop in Cygnus

As an end of the year finale, the National Optical Astronomy Observatory (NOAO) and WIYN partners offer this new wide-field image of the Cygnus loop. Three degrees on a side, this image covers an area of the sky about 45 times that of the full moon. But it does so without sacrificing high resolution. The image is over 600 million pixels in size, making it one of the largest astronomical images ever made.

The Cygnus Loop is a large supernova remnant: the gaseous remains of a massive star that exploded long ago. It is located about 1,500 light-years from Earth in the direction of the constellation Cygnus, the Swan.  Astronomers estimate the supernova explosion that produced the nebula occurred between 5,000 to 10,000 years ago. First noted in 1784 by William Herschel, it is so large that its many parts have been catalogued as separate objects, including NGC 6992, NGC 6995 and IC 1340 along the eastern (left) side of the image, NGC 6974 and NGC 6979 near the top-center, and the Veil Nebula (NGC 6960) and Pickering’s Triangle along the western (right) edge.  The bright star near the western edge of the image, known as 52 Cygnus, is not associated with the supernova.

The data were obtained with the NOAO Mosaic 1 camera, with observations in the Oxygen [OIII] (blue), Sulphur [S II] (green) and Hydrogen-Alpha (red) filters.  When mounted on the WIYN 0.9 meter telescope the Mosaic camera has a one square degree field of view.  The Cygnus Loop was observed with nine separate telescope pointings in a 3x3 grid pattern.

The observations were originally obtained in 2003 by Richard Cool, while he was a graduate student at the University of Arizona, as part of a project to precisely measure the distance to the Cygnus Loop. Dr. Cool, now at the MMT Observatory in Arizona, said, “Often, astronomical research reduces images to dry tables of numerical information that we analyze in order to more deeply understand our universe.  Images like this are amazing because they can remind you of the big picture and beauty that surrounds us”.  In 2003 the computing power available was insufficient to process the data into a single, full-resolution color image.  Nine years later, the data were re-reduced and processed by Travis Rector to create the image presented here.  Dr. Rector has produced a remarkable series of color images from NOAO telescopes.  They can be found at his website and on a dedicated NOAO image gallery page.

Images like this demonstrate that even relatively small telescopes when equipped with modern cameras are capable of producing cutting-edge research. The 0.9 meter telescope at Kitt Peak is operated by the WIYN Consortium. It has been in operation since 1960, when the original telescope was first installed at the site now occupied by the WIYN 3.5 meter telescope.  Today, the 0.9 meter is regularly used by graduate students and faculty for a variety of research projects. 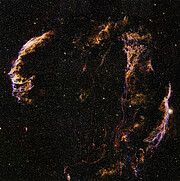