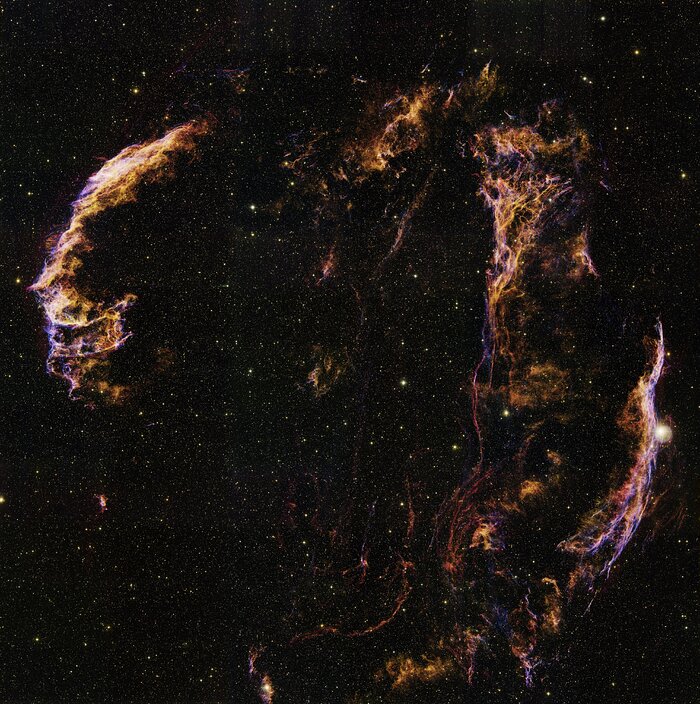 This image was obtained with the wide-field view of the Mosaic camera on the WIYN 0.9-meter telescope on Kitt Peak, Arizona. It shows faint filaments that are part of a large supernova remnant called the Cygnus Loop. The Cygnus Loop is a giant supernova remnant. It is the remains of a star that exploded 5000 to 10,000 years ago. The distance to it is estimated at about 1500 light years. Because of its immense size, it contains several individually named objects, including NGC 6992 and IC 1340 on the left side as well as NGC 6960 and Pickering's Triangle on the right. Separate, high-quality images of these four objects can also be found in this gallery. To create this image, nine separate images were taken and stitched together. The full-resolution image is over 600 megapixels in size. It covers an area of the sky that is about 45 times that of the full moon. The image was generated with observations in the Oxygen [OIII] (blue), Sulphur [S II] (green) and Hydrogen-Alpha (orange) filters. In this image, North is up, East is left. Please note that the full resolution version of this image is extremely large at more than 24,000 pixels on a side, and the file size of the TIFF is 1.65 Gigabytes. Read more about this image in NOAO Press Release 12-09.