A beautiful new image of spiral galaxy IC 342 that takes advantage of the dark night sky at Kitt Peak National Observatory is being released today in Washington, DC, at the opening of “The Night: Why Dark Hours Are So Important,” a two-day symposium hosted at the Carnegie Institution.

IC 342 is located in the constellation Camelopardalis, “the giraffe.” From our perspective on Earth, this galaxy is viewed through much of the stars and interstellar dust and gas within our own galaxy, the Milky Way. This means that much of the star light from IC 342 is diminished before it reaches us.

“Without all of the interstellar gas and dust between us and IC 342, it would be one of the brightest galaxies in our night skies and a favorite target for backyard astronomers,” said astronomer Travis Rector of the University of Alaska Anchorage. “Being able to produce an image like this, through all that obscuring gas and dust, demands dark night skies like those still found in Arizona at Kitt Peak, which are crucial for making observations of this depth and sensitivity.”

The image, obtained in late 2006, was taken using the 64-megapixel Mosaic-1 digital imager on the Mayall 4-meter telescope by Rector and Heidi Schweiker of the WIYN Observatory and the National Optical Astronomy Observatory (NOAO) in Tucson, AZ.

IC 342 is located roughly 11 million light-years from Earth, in the next group of galaxies beyond our Local Group. Its face-on appearance in the sky—as opposed to our tilted and edge-on views of many other nearby galaxies, such as the large spiral galaxy Andromeda (M31)—makes IC 342 a prime target for studies of star formation and astrochemistry, Rector adds.

A recently completed study of the dark skies in southern Arizona and how they may change over the next 25 years (“An Assessment of the Impact of Growth on the Dark Skies of Pima County,” D.R. Davis, et al., 2006) found that continuing effective enforcement of the Outdoor Lighting Code adopted by Pima County, ongoing public education, and minimization of light-intensive land use near Kitt Peak should stabilize light pollution at current levels. However, other observatories in Arizona face significant threats without similar actions, the study found.

Speakers at “The Night” meeting in Washington include experts and practitioners in fields ranging from astronomy, biology, medical and behavioral research to anti-terrorist force protection, recreation and parks management, illumination engineering and other engineering disciplines.

The conference is co-sponsored by the American Astronomical Society, the American Council for an Energy-Efficient Economy, the Association of Universities for Research in Astronomy, the Ecological Society of America, the International Dark-Sky Association, Monrad Engineering, the National Optical Astronomy Observatory and the National Science Foundation (NSF) and is supported by a grant from NSF’s Division of Astronomical Sciences and Office of Multidisciplinary Activities.

The WIYN Observatory is a partnership between NOAO, the University of Wisconsin, Indiana University and Yale University. 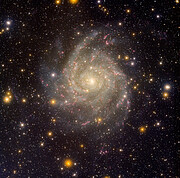