The American Astronomical Society (AAS) has awarded its 2006 Education Prize to Dr. Sidney Wolff, an astronomer and former director of the National Optical Astronomy Observatory in Tucson, Arizona.

The AAS Education Prize recognizes outstanding contributions to the education of the public, students and/or the next generation of professional astronomers. The citation for Dr. Wolff states:

“For her extraordinary commitment to science education throughout her career, beginning with authoring an introductory textbook, and culminating in the first professional, refereed, astronomy education journal, the “Astronomy Education Review,” which has become a highly-valued and influential communication channel for astronomy educators.

“For her efforts in highlighting and advancing astronomy education policy at the local, national and international levels, creating and promoting new opportunities for educators, students and the public.”

Wolff was the director of the National Optical Astronomy Observatory (NOAO) from 1987 to 2000, and she is currently a staff astronomer there. During her time as director, Wolff was responsible for the development of world-class facilities such as the WIYN 3.5-meter telescope on Kitt Peak and the SOAR 4.1-meter telescope in Chile, both with university partners. She also led a major effort to develop the scientific, technical, and management proposal for the 8-meter Gemini telescopes, serving as the first director of the Gemini project.

Wolff has been involved in education throughout her career, including the founding in 2002 and her subsequent editorship of the Astronomy Education Review, the first peer-reviewed journal for the emerging field of astronomy education and outreach. The journal is hosted by NOAO at: http://aer.noao.edu/

“This is a well-deserved honor for Sidney, who has played central roles in both operating an effective national observatory open to all astronomers and in helping train the next generation of scientists,” said NOAO Director Jeremy Mould. “With her help, astronomy education has become a valued and recognized career path in our field.”

The American Astronomical Society, established 1899, is the major organization of professional astronomers in North America. The basic objective of the AAS is to promote the advancement of astronomy and closely related branches of science. The membership (~6,500) also includes physicists, mathematicians, geologists, engineers and others whose research interests lie within the broad spectrum of subjects now comprising contemporary astronomy.

Wolff is one of seven prize winners announced today by the AAS. The President of the American Astronomical Society, Prof. Robert P. Kirshner, Clowes Professor of Science at Harvard University, stated, “It’s a pleasure to congratulate these distinguished astronomers on their well deserved selection for the six awards. They are representative of the finest of our profession.” Other recipients include: 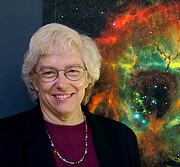