Astronomers using the National Science Foundation's Blanco Telescope in Chile have used the distorting effects of a weak gravitational lens to discover and locate a dim cluster of at least 15 galaxies at a significant distance from Earth, using only the mass properties of the cluster, not its visible light.

This first-time accomplishment raises clear prospects for a powerful technique called 3-D mass tomography to conduct large-scale searches for dark matter. This approach may provide a valuable independent check of current theories about the accelerating expansion of the Universe.

"Most of the 'big action' in the Universe is governed by the mass of objects, not by their visible light or other electromagnetic radiation," explains Anthony Tyson of Lucent Technologies' Bell Labs, Murray Hill, NJ. "This fundamentally new approach lets us measure mass instead of light, based on simple physics that circumvents much of the unavoidable bias inherent in trying to use tiny variations in brightness to derive critical properties of distant objects."

Several recent astronomical discoveries have taken advantage of the fact that massive objects bend the path of light from more distant objects located behind them, as seen from Earth. This property, called gravitational lensing, was predicted by Albert Einstein.

In this case, the large mass of the newly found galaxy cluster forms a weak intervening lens that shears, or unevenly bends, the light from more distant galaxies behind it. The distorted, elongated images of the background galaxies were identified and processed by a computer program. More importantly, this program generated an estimate for the unknown cluster's redshift, or its velocity of recession from Earth. This redshift matched precisely with more traditional spectroscopic redshift measurements taken as an independent check by the research team.

A detailed research paper on the newly detected galaxy cluster will be published in the August 20 issue of Astrophysical Journal Letters.

"We have shown that we can measure the distance to the cluster by charting the amount of shear versus the distance to the background galaxies," says lead author David Wittman of Bell Labs. "This lets us locate the cluster in its proper place in three-dimensional space, all without resorting to studying its light. This is important because most of the mass in the Universe is dark."

The team used the National Science Foundation's Blanco 4-meter telescope at Cerro Tololo Inter-American Observatory (CTIO), outfitted with an instrument called Big Throughput Camera, to take numerous images in four different filters of a relatively barren portion of the visible sky, in the direction of the constellation Pisces.

This effort yielded rough color-based (or photometric) redshifts for various objects in the images. A computer program then sifted through the images, looking for telltale distortions in the shape of the objects by intervening clumps of matter. The program sorts the distortions into different "bins" based on their locations and shapes, and then constructs a full three-dimensional map of the region of space.

The predicted astronomical redshift of the galaxy cluster and its mass properties match precisely with spectroscopic measurements made using the W. M. Keck telescopes on Mauna Kea, HI, at almost exactly the predicted redshift of z = 0.276. This number is equivalent to looking back in time to how the cluster appeared about three billion years ago.

"With a bit more experience we will be able to do a blind search and effectively become 'intergalactic prospectors' for extremely faint clumps of mass in any direction, out to about one-half the estimated age of the Universe," Tyson says. "This will offer a test of the idea of an accelerating Universe that is completely independent of the supernovae observations which have formed the basis of this theory."

This research result is a precursor to a larger project led by Tyson called the Deep Lens Survey, one of more than a dozen major sky surveys supported by the National Optical Astronomy Observatory (NOAO). Further information about the Deep Lens Survey, which should reveal scores of such clusters using the weak lens effect, is available on the Internet at:

Through Lucent Technologies' Bell Labs, Tyson and Wittman are partners with NOAO and the University of Arizona's Steward Observatory in developing a detailed concept for a future ground-based facility called the Large Synoptic Survey Telescope (LSST). A top priority of the most recent decadal survey of astronomy, the LSST features an 8-meter class mirror with an extraordinarily large, three-degree field-of-view that promises to image the entire sky to a faint stellar magnitude (R = 23.9) every few nights.

"If we can do this kind of analysis over a large-enough area, we can use statistics to tell us how mass has clumped together over cosmic time, and see how well the results match with the idea of accelerating expansion," Tyson explains. "We'll need billions of background galaxies to do a full-up investigation, and LSST is the only thing on the horizon that can do the job."

Other co-authors of the upcoming paper are Vera Margoniner of Bell Labs, Judy Cohen of the California Institute of Technology, Pasadena, CA, and Ian Dell'Antonio of Brown University, Providence, RI.

Located east of La Serena, Chile, CTIO is the southern hemisphere site of the National Optical Astronomy Observatory, which is based in Tucson, AZ. NOAO is operated by the Association of Universities for Research in Astronomy (AURA), Inc., under a cooperative agreement with the National Science Foundation. 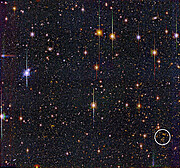 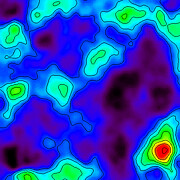