The simple spherical geometry of planetary nebula Abell 39 will help astronomers identify the source of very serious errors in measuring the chemical composition of dying stars.

"The truly spherical nature of this beautiful nebula helps us eliminate a common confusion concerning the actual three-dimensional geometry of most nebulae," says George Jacoby, director of the Wisconsin-Indiana-Yale-NOAO (WIYN) Observatory and co-author of a study with Gary Ferland of University of Kentucky and Kirk Korista of Western Michigan University.

The butterfly-like shape of many nebulae, and filaments or clumps of dense gas within them, cause starlight to penetrate the nebulae unevenly, depending on the density and thickness of the clumps, as well as the distance of the gas from the star. Only in rare cases can the nebula's geometry be deduced from indirect measurements in order to model the interactions.

As reported today in San Diego at the 197th meeting of the American Astronomical Society, researchers found that the star that produced Abell 39 had only half the amount of oxygen found in the Sun. This result is not especially unusual, because the Sun has a relatively enriched composition of heavy elements. But for some stars, the same sorts of analyses have yielded compositions that can disagree with each other by a factor of three or more.

"Such discrepancies are totally unsatisfactory for developing a detailed picture of how chemical elements were built up over time in our galaxy and in other parts of the Universe," Jacoby explains.

Abell 39 is the 39th entry in a catalog of large nebulae discovered by astronomer George Abell in 1966. This image of it was taken at the WIYN Observatory's 3.5-meter (138-inch) telescope, through a blue-green filter that isolates the light emitted by oxygen atoms in the nebula at a wavelength of 500.7 nanometers.

Unfortunately, Abell 39 is so faint that Jacoby and collaborators were unable to measure all the critical information from the nebula that is needed to isolate the cause of the composition measurement discrepancies, even though they used the National Science Foundation's Mayall 4-meter telescope at Kitt Peak National Observatory to collect spectral details. Instead, they provide their predictions of what they expected to measure, in order to guide future observers with more sensitive equipment and larger telescopes.

The nebula has a diameter of about five light-years, and the thickness of the spherical shell is about a third of a light-year. Positioned in the constellation Hercules, the nebula is located roughly 7,000 light-years from Earth.

Careful viewing of the image shows that the "central" star is off-center to the right by a small amount (less than a tenth of a light-year.) The cause of this shift is unknown. Furthermore, the very faint glow barely visible around the brightest part of the nebula is evidence for a larger halo surrounding the main body. As a curiosity, several distant galaxies can be seen right through the nebula and just outside of it.

This research was partially supported by a NASA grant. 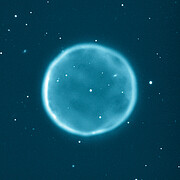