Astronomers studying how elements heavier than iron were produced in the early Milky Way have identified a distinct series of epochs of galaxy-wide chemical formation.

This evolutionary timeline, stretching from the Big Bang onward for several billion years, has the potential to serve as a cosmic "fingerprint manual" that could help astronomers categorize some of the quirky high-redshift galaxies seen in recent samples of the ancient Universe, such as the Hubble Deep Field, and in deeper sky surveys to come.

The research team looked at nearly 100 stars in the halo around the Milky Way, carefully selecting them to be relatively nearby, old and at least 10 to 100 times depleted of metals as compared to our Sun. Subsequent plots of elemental ratios in the stars revealed obvious trends over time that allow a larger chronology to be developed.

"This is one of the largest studies yet of the abundances of heavy elements in galactic halo stars," says Debra Burris of Oklahoma City Community College, lead author of a paper scheduled for the November 20 issue of the Astrophysical Journal. "The behavior of the trends in abundances of these elements give us major clues about the conditions and populations of stars that existed early in the Milky Way's history."

"Our results tell us that the history of the galaxy is tied very closely to the ways that stars change from generation to generation," explains co-author Catherine Pilachowski of the National Optical Astronomy Observatory (NOAO) in Tucson, AZ. "Certain chemical elements don't form until the stars that make them have had time to evolve. Therefore, we can read the history of star formation in the compositions of the oldest stars."

"It's extremely difficult to accurately age-date a star. The chemical signatures give us an effective chronometer that we can use to probe the earliest epochs," says co- author Taft Armandroff of NOAO. "We probably would not have found these trends if we did not have such a large sample"

The research team developed this evocative timeline to explain their observations:

The Epoch of Very Massive Stars
The earliest stages of heavy element formation in the Galaxy were dominated by stars with masses ten times that of the Sun or more, and lifetimes of a few million years or less. These supermassive stars produced small amounts of all the elements, but their presence can be identified most clearly by excesses of elements like strontium, yttrium and zirconium. Released by supernovae and absorbed by new star-forming clouds, these elements were incorporated into the next generation of stars

The Europium Epoch
For the next 30-100 million years, element formation was dominated by supernovae from stars with about 8-10 times the mass of the Sun. These longer-lived stars enriched the Milky Way in heavier elements like barium, europium, and other lanthanide elements in the Periodic Table, such as cerium.

The Double Shell Epoch
A major shift from previous epochs, lasting from about 100 million to a billion years after the Galaxy formed, it featured stars with perhaps 3-7 times the mass of the Sun. These stars produced more strontium, barium, and some particular lanthanides from nuclear-burning interior shells during the later stages of their evolution, not by supernovae. Their products are characterized by more solar-like distribution of heavy elements.

The Iron Epoch
From one billion to three billion years after the Galaxy formed, supernovae from white dwarf stars a bit larger than the Sun produced large amounts of iron. The addition of large amounts of iron to the Milky Way's chemical stew can be deduced by the relative decrease of heavier metals within stars which hold about 1/100th of the Sun's overall metal abundance.

Since this epoch, which ended roughly 10 billion years ago, the major edition to the Galaxy's inventory of heavy elements has been lithium, but the exact source is unknown.

The measurements used to develop these epochs were obtained with spectrographic instruments on the National Science Foundation's Mayall 4-meter telescope and Coude-Feed telescope operated by Kitt Peak National Observatory near Tucson.

Because even the largest telescopes with the latest cutting-edge technology do not have the ability to resolve individual stars in ancient, high-red shift galaxies, detailed spectrographic measurements of the oldest stars in the Milky Way and other local group galaxies may be the only way we can study element formation in the very early universe.

"The fossil structure of the Milky Way tells us about a time even earlier than the most distant galaxies yet discovered," Pilachowski notes. "But as we find galaxies at higher and higher redshifts, we will eventually be able to investigate galaxies similar to what the Milky Way must have looked like during these early epochs."

In the future, team members may also study the relative motions of the same sample of stars to try and deduce whether they originate from any common groups or "streams" of stars. Such information could help inform debates about whether the Milky Way began as a loose cloud of gas that formed stars and then spun down into the spiral disk we know today, or whether a more clumpy structure analogous to dwarf galaxies came first. In this model, the dwarf-like galaxies were torn apart and then merged by tidal forces into the current disk.

"Ultimately, we hope to answer questions like 'How long did the initial burst of star formation in the Galaxy last, 100 million years or five billion years?'" Armandroff explains. "There are a lot of interesting clues in the local population."

NOAO is operated by the Association of Universities for Research in Astronomy (AURA), Inc., under cooperative agreement with the National Science Foundation. The NSF also supported this research through grants to several co-authors. 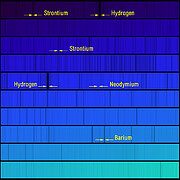