High-resolution imaging of Jupiter by the Gemini North telescope on Maunakea is informing the Juno mission of compelling events in Jupiter’s atmosphere. “The Gemini observations, spanning most of the first half of this year, have already revealed a treasure-trove of fascinating events in Jupiter’s atmosphere,” said Glenn Orton, PI for this Gemini adaptive optics investigation and coordinator for Earth-based observations supporting the Juno project at Caltech’s Jet Propulsion Laboratory.

“Back in May, Gemini zoomed in on intriguing features in and around Jupiter’s Great Red Spot: including a swirling structure on the inside of the spot, a curious hook-like cloud feature on its western side and a lengthy, fine-structured wave extending off from its eastern side,” adds Orton. “Events like this show that there’s still much to learn about Jupiter’s atmosphere – the combination of Earth-based and spacecraft observations is a powerful one-two punch in exploring Jupiter.”

Juno has now made five close-up passes of Jupiter’s atmosphere, the first of which was on August 27, 2016, and the latest (the sixth) on May 19th of this year. Each of these close passes has provided Juno’s science team with surprises, and the Juno science return has benefited from a coordinated campaign of Earth-based support – including observations from spacecraft orbiting the Earth (covering X-ray through visible wavelengths) and ground-based observatories (covering near-infrared through radio wavelengths).

Next up: Juno’s close passages to Jupiter on July 11, 2017. “Gemini observations, which are already underway for the July flyby, are helping to guide our plans for this passage,” said Orton. He adds that the types of light Gemini captures provide a powerful glimpse into the layers of Jupiter’s atmosphere and provides a 3-dimensional view into Jupiter’s clouds. Among the questions Juno is investigating include poorly understood planetary-scale atmospheric waves south of the equator. “We aren’t sure if these waves might be seen at higher latitudes,” said Orton. “If so it might help us understand phenomena in Jupiter’s circulation that are quite puzzling.”

“Wow – more remarkable images from the adaptive optics system at Gemini!” said Chris Davis, Program Officer for Gemini at the National Science Foundation (NSF), one of five agencies that operate the observatory. “It’s great to see this powerful combination of ground and space-based observations, and the two agencies, NSF and NASA, working together on such scientifically important discoveries.”

The Gemini observations use special filters that focus on specific colors of light that can penetrate the upper atmosphere and clouds of Jupiter. These images are sensitive to increasing absorption by mixtures of methane and hydrogen gas in Jupiter’s atmosphere. “The Gemini images provide vertical sensitivity from Jupiter’s cloud tops up to the planet’s lower stratosphere,” according to Orton.

The observations also employ adaptive optics technology to significantly remove distortions due to the turbulence in the Earth’s atmosphere and produce these extremely high-resolution images. Specifically, the detail visible in these images of Jupiter is comparable to being able to see a feature about the size of Ireland from Jupiter’s current distance of about 600 million kilometers (365 million miles) from Earth.

In addition to images using adaptive-optics technology, a parallel Gemini program headed by Michael Wong of the University of California, Berkeley, used a longer-wavelength filter, for which adaptive optics is not needed. To obtain these data several images were made with short exposures, and the sharpest images were combined in processing - an approach commonly called “lucky imaging.” Images obtained with this filter are mainly sensitive to cloud opacity (blocks light) in the pressure range of 0.5 to 3 atmospheres. “These observations trace vertical flows that cannot be measured any other way, illuminating the weather, climate and general circulation in Jupiter’s atmosphere,” notes Wong. This image is shown in Figure 3.

Subaru Telescope also supplied simultaneous mid-infrared imaging with its COMICS instrument – measuring the planet’s heat output in a spectral region not covered by Juno’s instrumentation, and producing data on composition and cloud structure that complement both the Juno and Gemini observations. For example, they show a very cold interior to the Great Red Spot that is surrounded by a warm region at its periphery, implying upwelling air in the center that is surrounded by subsidence. They also show a very turbulent region to the northwest of the Great Red Spot. The Subaru image is available at: http://subarutelescope.org/Topics/2017/06/30/index.html.

The NASA Juno spacecraft was launched in August 2011 and began orbiting Jupiter in early July 2016. A primary goal of the mission is to improve our understanding of Jupiter – from its atmospheric properties to our understanding of how Jupiter and other planets in the outer Solar System formed. Juno’s payload of nine instruments can probe the atmospheric composition, temperature, cloud dynamics as well as the properties of Jupiter’s intense magnetic fields and aurora.

Gemini’s near-infrared images are particularly helpful to Juno’s Jupiter Infrared Auroral Mapper (JIRAM). JIRAM takes images at 3.5 and 4.8 microns and moderate-resolution spectra at 2–5 microns. The Gemini images provide a high-resolution spatial context for JIRAM’s spectroscopic observations and cover wavelengths and regions of the planet not observed by JIRAM. They also place an upper-atmospheric constraint on Jupiter’s circulation in the deep atmosphere determined by Juno’s Microwave Radiometer (MWR) experiment.

In the full campaign of Earth-based support, the Gemini observations provide a key element that extends the spectral coverage of other facilities, as well as providing a strategic sampling to compare with the lower-resolution but more frequent imaging by NASA’s Infrared Telescope Facility (IRTF) that tracks the evolution of atmospheric features. These Gemini data are also a useful measure of cloud properties to compare with mid-infrared thermal imaging and spectroscopy of Jupiter’s atmosphere, such as that provided by Subaru’s COMICS experiment. The space platforms are involved in the Juno-support campaign include the XMM, Chandra and NuSTAR X-ray observatories and the Hisaki ultraviolet observatory, together with the Hubble Space Telescope. The many ground-based observatories include the Very Large Telescope (VLT), the Atacama Large Millimeter Array (ALMA), Calar Alto Observatory, and a suite of visible and radio observatories. Full details of the campaign can be found on: https://www.missionjuno.swri.edu/planned-observations. 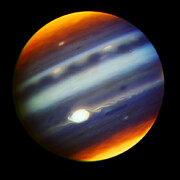 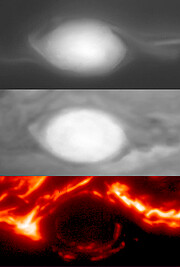 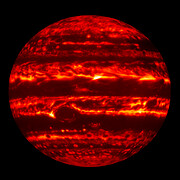