Astronomers using the 8-meter Gemini North telescope on Hawaii’s Maunakea have probed an enigmatic, and unexpected, supermassive black hole dominating the core of a large galaxy in the cosmic backwaters.

“It’s a bit like finding a skyscraper in a Kansas wheat field, rather than in Manhattan,” says Chung-Pei Ma of the University of California Berkeley who led the international team of researchers. “We expect to find gigantic black holes in massive galaxies in a crowded region of the universe, where frequent galaxy collisions and cannibalism sustain the black holes' insatiable appetite and allow them to grow to excess. But to find one in relative isolation indicates that the black hole has long-ago tapped its sources of matter that allowed it to grow."

The research, published online on April 6th in the journal Nature (requires a subscription), provides a rare glimpse of a supermassive black hole – one with a mass some 17 billion times the mass of our Sun – deep within a rather isolated galaxy, known as NGC 1600, some 200 million light years from our Milky Way Galaxy. Finding such a monster black hole in a galaxy with so few traveling companions is an enigma.

The presence of this enormous black hole, lurking in a relatively barren outpost of our cosmic neighborhood, also presents an opportunity. The lonely monster, thought to be a primitive relic of galaxy growth, is helping to shed light on how huge black holes could have formed rapidly in the early epochs of our Universe. This, in-turn, provides evidence for what is likely a rare leftover power supply for an ancient quasar – objects that shined brilliantly when the Universe was only a few billion years old.

“Other galaxies found to harbor very massive black holes are typically located in dense regions of the Universe populated by many other galaxies and clusters,” says Jens Thomas of the Max Planck Institute of Physics who is the paper’s lead author. “By contrast, NGC 1600 is in a modest group of galaxies in a rather mundane part of the sky.”

How can such a large black hole exist now without a substantial source of material to feast on? Thomas points his finger at NGC 1600 itself. “Within the group, NGC 1600 is by far the most brilliant member and outshines other members by at least three times, an indication that NGC 1600 may have cannibalized its former neighboring galaxies and their central black holes in its youth.”

“NGC 1600 also appears to have scoured away many of its central stars,” continues Thomas, who believes that the black hole within NGC 1600 was once part of a pair of (or even multiple) black holes that worked as a team to gravitationally expel nearby stars. “Rather than devour them,” Thomas says, “the black holes would act like a gravitational slingshot, sending neighboring stars careening out of the galaxy’s core.”

A pair, or multiple black holes would also be expected when galaxies collide and merge, as the team believes happened long ago with NGC 1600.

Understanding this lonely relic galaxy required the power of the Gemini Multi-Object Spectrograph (GMOS) on the Gemini North 8-meter telescope on Maunakea in Hawai‘i. GMOS spectroscopically dissected the light from the core of the galaxy and allowed the team to discover the extreme mass of the black hole. To map this environment, researchers had to model the surface brightness of the galaxy and velocity distributions around the center of the galaxy, and compare this to orbit superposition models. The collection and analysis of spectroscopic data from Gemini was led by National Research Council Canada (NRC)’s Nicholas McConnell.

“After many years of exemplary service, it’s great to see that the Gemini Multi-Object Spectrographs (GMOS) continue to contribute in such a fundamental way to these important areas of astronomy,” said Chris Davis, program director at the U.S. National Science Foundation, which, together with partner agencies in Argentina, Brazil, Canada, and Chile, support the operation of the Gemini Observatory. “In just a few months, two separate teams using GMOS have published compelling yet contrasting results: one group finding evidence for a super-massive black hole that’s flinging stars outward from its galaxy's core, and another observing a black hole that clings on to its stellar neighbors. One wonders what other remarkable things Gemini and this remarkable technology will tell us about super-massive black holes and the cores of distant galaxies in the years to come.”

In addition the Gemini observations, the Mitchell Integral Field Spectrograph at the McDonald Observatory as well as NICMOS on the Hubble Space Telescope probed the core to characterize the sparse stellar environment. To distinguish the mass of the central black hole from the mass associated with starlight, NRC’s John Blakeslee analyzed images from the Hubble Space Telescope

The focus on NGC 1600 for this study was a result of the MASSIVE Survey, supported by the US National Science Foundation. Initiated in 2014, the MASSIVE Survey focuses on about 100 of the most massive, early-type, galaxies within about 300 million light years of the Milky Way. Gemini continues to play a critical role in MASSIVE by measuring the velocities of stars swarming around the galaxies’ supermassive black holes, and thus discovering the black holes’ masses.

Ma speculates that the black hole in NGC 1600 might be the tip of an iceberg. “Maybe there are many more monster black holes that don’t live in an obvious skyscraper in Manhattan,” says Ma. “If so, GMOS on Gemini will help us find them.” Ma also notes that the masses of the three largest known black holes were all determined by Gemini, including two 10 billion solar mass black holes discovered by her team in 2011.

“If the deficit of stars in the center of NGC 1600 is indeed due to a pair of black holes, then the twins could have coalesced and created gravitational waves,” says Ma. “These would be the supermassive version of the black hole binary detected by Advanced LIGO two months ago.” 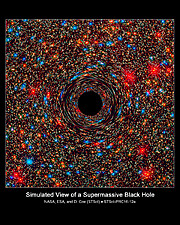