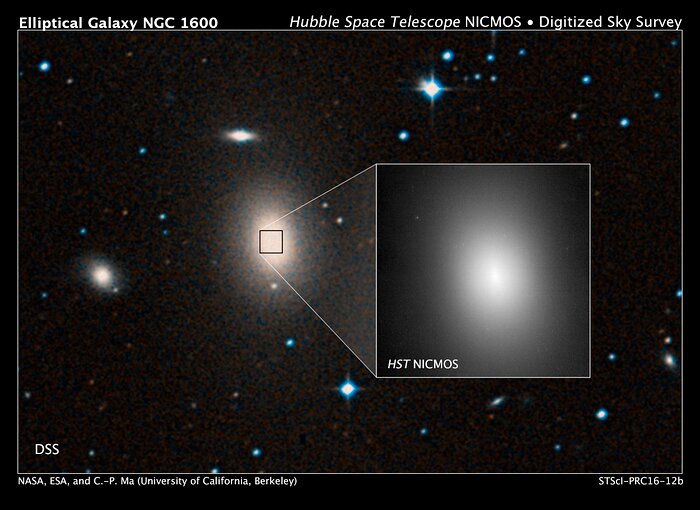 The massive elliptical galaxy in the center of this image, taken by the Digitized Sky Survey, resides in an uncluttered region of space. A close-up view of the galaxy, called NGC 1600, is shown in the inset image, which was taken in near-infrared light by the Hubble Space Telescope's Near Infrared Camera and Multi-Object Spectrometer (NICMOS). At the heart of NGC 1600 lurks one of the most massive black holes ever detected. The supersized black hole, weighing 17 billion suns, resides in an unlikely place. The biggest supermassive black holes – those roughly 10 billion times the mass of our sun – have been found at the cores of very large galaxies in regions of the universe packed with other large galaxies. This black hole, however, lives in a cosmic backwater town. Astronomers suggest that the black hole grew from repeated collisions between its home galaxy and neighboring galaxies, which funneled gas to the massive object. The black hole also may have merged with a black hole from one of the consumed galaxies. The frequent feasts may also explain why NGC 1600 has few neighbors. NGC 1600 is located 209 million light-years from Earth. The NICMOS image was taken on Nov. 10, 1998.