Twin Galaxies in a Gravitational Embrace

In what appears to be a masterful illusion, astronomers at Gemini Observatory have imaged two nearly identical spiral galaxies in Virgo, 90 million light years distant, in the early stages of a gentle gravitational embrace. The new image was obtained at the Gemini South telescope in Chile using GMOS, the Gemini Multi-Object Spectrograph.

Like two skaters grabbing hands while passing, NGC 5427 (the nearly open-faced spiral galaxy at lower left) and its southern twin NGC 5426 (the more oblique galaxy at upper right), are in the throes of a slow but disturbing interaction – one that could take a hundred million years to complete.

At a glance, these twin galaxies -- which have similar masses, structures, and shapes and are together known as Arp 271 – appear undisturbed. But recent studies have shown that the mutual pull of gravity has already begun to alter and distort their visible features.

Typically, the first sign of a galaxy interaction is the formation of a bridge-like feature. Indeed, the two spiral arms on the western (upper) side of NGC 5426 appear as long appendages that connect with NGC 5427. This intergalactic bridge acts like a feeding tube, allowing the twins to share gas and dust with one other across the 60,000 light years (less than one galaxy diameter) of space separating them.

Colliding gases caused by the interaction may have also triggered bursts of star formation (starbursts) in each galaxy. Star-forming, or HII, regions appear as hot pink knots that trace out the spiral patterns in each galaxy. HII regions are common to many spiral systems, but the giant ones in NGC 5426 are curiously knotted and more abundant on the side of the galaxy closest to NGC 5427. Starburst activity can also be seen in the galaxy’s connecting bridge.

Likewise, the giant HII regions in NGC 5427’s disk are forming at a higher rate, and are more plentiful, than expected for a galaxy of this type. One giant star-forming region at the tip of NGC 5427’s western (top) spiral arm, looks especially large and disturbed, as does the arm itself, which is unusually straight, as if strong tidal forces have broken the arm in two, causing it to bleed starlight.

Despite their appearance in this two-dimensional image, NGC 5426’s western (top) spiral arm is the one closest to us, as opposed to NGC 5427’s southeastern (bottom) arm. NGC 5426 is also the closer of the two galaxies. Over millions of years, however, NGC 5427 will perform a parabolic traverse (see Figure 2), moving it from behind NGC 5426 towards the foreground in the upper-right corner of the frame. Thus, an imaginary long-lived observer on a planet in NGC 5427 would see an almost perpendicular passage of the companion galaxy.

Once thought to be unusual and rare, gravitational interactions between galaxies are now known to be quite common (especially in densely populated galaxy clusters) and are considered to play an important role in galaxy evolution. Most galaxies have probably had at least one major, if not many minor, interactions with other galaxies since the advent of the Big Bang some 13 billion years ago. Our own Milky Way, a spiral galaxy like those in this image, is, in fact, performing its own stately dance. Both with the nearby dwarf galaxy, called the Large Magellanic Cloud and a future interaction with the large spiral galaxy M-31 or the Great Andromeda Galaxy, which is now located about 2.6 million light years away from the Milky Way. This new Gemini image is possibly a preview of things to come for our own galaxy. Ultimately the end result of these types of collisions will be a large elliptical galaxy. 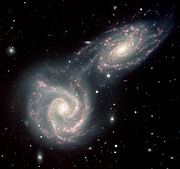 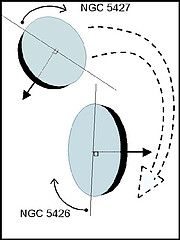