Catching the Light of a Baby Supernova

Astronomers have observed the aftermath of spectacular stellar explosions known as supernovae before, but until now no one has witnessed a star dying in real time. While observing supernova 2007uy with the Swift X-ray Telescope, Alicia Soderberg and Edo Berger (Princeton University) discovered a mysterious X-ray flash elsewhere in the galaxy NGC 2770 located about 90 million light years away (Figure 1). Within a few hours observatories around the world scrambled to study its light. In a rapid sequence of events the Gemini North telescope was able to capture and dissect the object’s light in a set of optical spectra that contains the earliest spectrum ever obtained of a massive star ending its life in a supernova explosion outside of our galaxy’s neighborhood.

“We were in the right place, at the right time, with the right telescope on January 9th and witnessed history,” said Soderberg. “Thanks to the unique capabilities of the Swift satellite and the rapid response of the Gemini telescope we were able to observe a star in the act of dying.”

The result of this rapid response, following the January 9, 2008 discovery, allowed Gemini to provide time-critical spectroscopic observations of the young supernova and the development of the explosion in a unique sequence of optical spectra using Gemini North telescope on Mauna Kea in Hawai‘i.

“When I was alerted by Edo Berger shortly after the X-ray outburst, we didn’t know what it was,” said Jean-René Roy Deputy Director and Head of Science at the Gemini Observatory. “We immediately agreed to Edo’s request for Director’s Discretionary time to observe the object.” Roy approved the program, “… feeling that we had a unique opportunity.”

The spectra were obtained with the Gemini Multi-Object Spectrograph (GMOS) nearly every night between January 11 and 30, 2008 (Figure 2) and have set a record for the youngest supernova ever captured by optical spectroscopy other than supernova 1987A which occurred in the satellite galaxy to the Milky Way known as the Large Magellanic Cloud.

“A few weeks later we had accumulated an outstanding sequence of optical spectra of a young supernova. I am very pleased that Gemini could work with the team and play a strategic role in following this unusual event,” said Roy. These data allowed the team to show that this was a Helium-rich supernova of a type known as Ibc, and also to measure the speed of the explosion. The X-ray outburst is interpreted as the break-out of the supernova shock through the dense wind surrounding the progenitor star, suspected to have been what is known as a Wolf-Rayet star.

“We now know what X-ray pattern to look for when a star explodes,” said Berger. “Hopefully we will be able to find and study many more supernovae at this critical moment.”

The potential of finding a large number of supernovae at the time of explosion will also open up avenues of research that previously seemed nearly impossible. In particular, the determination of the exact explosion time will allow searches for neutrino and gravitational wave bursts that are predicted to accompany the collapse of the stellar core and the birth of the neutron star.

“The next generation of X-ray satellites will find hundreds of supernovae exactly when they explode, and telescopes like Gemini will help us study the detailed physics” said Soderberg. “I am thrilled that our discovery is leading this new wave of astronomy.”

The results will be published in the May 22nd issue of the journal Nature by lead author Alicia Soderberg (with 37 co-authors) in a paper titled: “An extremely luminous X-ray outburst marking the birth of a normal supernova.” 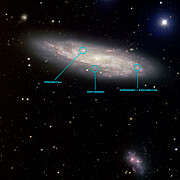 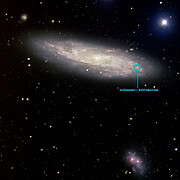 PR Image gemini0804b
Catching the Light of a Baby Supernova 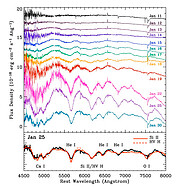 PR Image gemini0804c
Catching the Light of a Baby Supernova