The Delicate Trails of Star Birth

An image released today by the Gemini Observatory brings into focus a new and remarkably detailed view of supersonic "bullets" of gas and the wakes created as they pierce through clouds of molecular hydrogen in the Orion Nebula. The image was made possible with new laser guide star adaptive optics technology that corrects in real time for image distortions caused by Earth's atmosphere.

The Orion Nebula is a star-forming region located relatively near to us, about 1,500 light-years away. It's a young stellar nursery and shows many unusual features related to the effect of massive stars on the dense birth environment of gas and dust.

The Orion bullets were first seen in a visible-light image in 1983. By 1992, images taken at infrared wavelengths led astronomers to conclude that these clumps of gas were ejected from deep within the nebula following an unknown violent event connected with the recent formation of a cluster of massive stars there. The bullets are speeding outward from the cloud at up to 400 kilometers (250 miles) per second. This is more than a thousand times faster than the speed of sound. The name "bullet" is somewhat misleading since these objects are truly gigantic. The typical size of one of the bullet tips is about ten times the size of Pluto's orbit around the Sun. The wakes shown in the image are about a fifth of a light-year long.

Clouds of iron atoms at the tip of each bullet glow brightly (blue in the Gemini image) as they are shock-heated by friction to around 5000°C (9,000°F). Molecular hydrogen, which makes up the bulk of both the bullets and the surrounding gas cloud, is destroyed at the tips by the violent collisions between the high-speed bullets and the surrounding cloud. On the trailing edges of the bullets, however, the hydrogen molecules are not destroyed, but instead are heated to about 2000°C (4000°F). As the bullets plow through the clouds they leave behind distinctive tubular wakes (colored orange in the Gemini image). These wakes shine like bullet tracers due to the heated molecular hydrogen gas.

"What I find stunning about the new image is the detail it shows, which was blurred out in any previous studies, revealing the structure of the bullets and their trailing wakes as they run into the surrounding molecular cloud," said Michael Burton of the University of New South Wales who, along with the late David Allen (Anglo-Australian Observatory) were the first to suggest the origin of these spectacular bullets 15 years ago. "This level of precision will allow the evolution of the system to be followed over the next few years, for small changes in the structures are expected from year to year as the bullets continue their outward motion."

The bullets are relatively young, with their ages estimated to be less than a thousand years since ejection. The new Gemini adaptive optics image shows them in near-infrared light in a combination of three images using different filters. The blue features in the Gemini image correspond to the shocked regions where the iron is fluorescing. The orange regions are the glowing hydrogen molecules in the bullet's wakes. In this image, the wakes ("fingers") behind each of the iron-gas bullets are resolved into filaments for the first time ever. These might well be the actual sheaths enclosing the shock waves created as the bullets travel through the cloud.

The exceptional resolution of the new image was made possible by adaptive optics technology in place at Gemini Observatory. With a laser guide star as a reference and a rapidly deformable mirror for real-time correction, astronomers can compensate for most of the atmospheric distortions that blur the near-infrared image of a star whose light reaches the telescope's primary mirror. The system deploys a yellow/orange solid-state sodium laser that produces the artificial guide star by exciting and causing a small column of sodium gas about 90 kilometers (56 miles) up in our atmosphere to glow. The artificial star it creates becomes a reference star for the adaptive optics system, and allows it to determine how the atmosphere distorts the incoming near-infrared starlight.

This Gemini image was obtained as part of the commissioning and science verification of the Gemini North laser guide star system. The data used to make this image are available to astronomers world-wide by accessing the Gemini Science Archive. Laser guide star technology is relatively new and has recently been advanced by the Gemini Observatory with the development of a solid-state laser for this purpose, a joint venture with the US National Science Foundation and the US Air Force. The Gemini North solid-state, sum-frequency laser was designed and built under contract by Coherent Technologies (now Lockheed Martin/Coherent Technologies). ALTAIR, the Gemini North adaptive optics system, was designed and built by the Herzberg Institute of Astrophysics in Victoria, Canada. 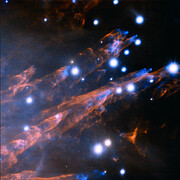 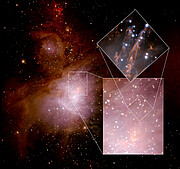 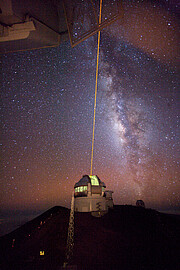 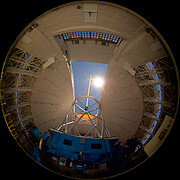 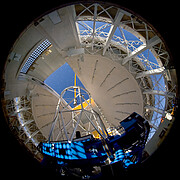