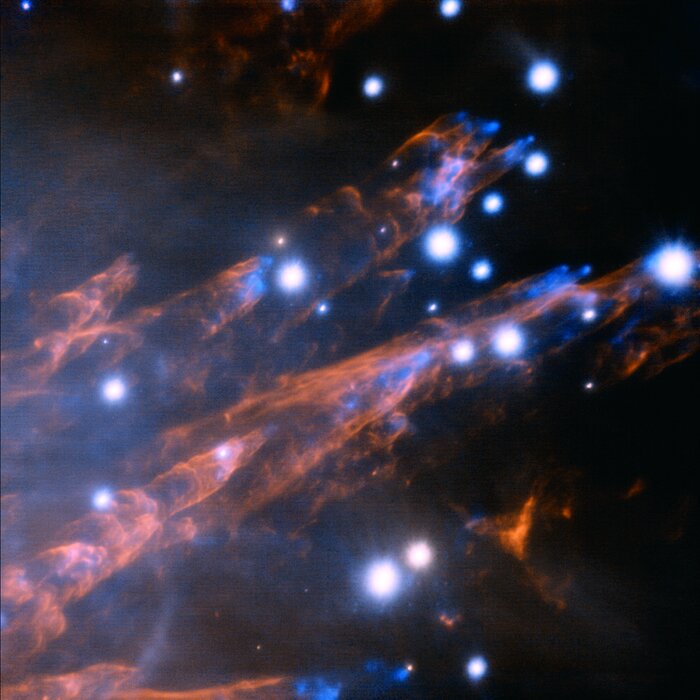 Gemini's Laser Vision Reveals Striking New Details in Orion Nebula This composite image at infrared wavelengths was obtained using the Gemini North laser guide star system in conjunction with the ALTAIR adaptive optics system and the NIRI near-infrared imager. The image shows the Orion "bullets" as blue features and represents the light emitted by hot iron (Fe) gas. The light from the wakes, shown in orange, is from excited hydrogen gas.This image brings into focus a remarkably detailed view of supersonic “bullets” of gas and the wakes created as they pierce through clouds of molecular hydrogen in the famous Orion Nebula. The image was made possible with laser guide star adaptive optics technology that corrects in real-time for image distortions caused by the Earth’s atmosphere. The Orion bullets were first seen in a visible-light image in 1983. By 1992, images taken at infrared wavelengths led astronomers to conclude that these clumps of gas were being ejected from deep within the nebula following an unknown violent event connected with the recent formation of a cluster of massive stars there. The bullets are speeding outward from the cloud at up to 400 kilometers (250 miles) per second – more than a thousand times faster than the speed of sound. The name “bullet” is somewhat misleading since these objects are made of gas and truly gigantic. The typical size of one of the bullet’s tips is about ten times the size of Pluto’s orbit around the Sun. The wakes shown in the image are about a fifth of a light-year long. Clouds of iron atoms at the tip of each bullet glow brightly (blue in this image) as they are shock-heated by friction to around 5000°C (9,000°F). Molecular hydrogen, which makes up the bulk of both the bullets and the surrounding gas cloud, is destroyed at the tips by the violent collisions between the high-speed bullets and the surrounding cloud. However, on the trailing edges of the bullets the hydrogen molecules are not destroyed, but instead are heated to about 2000°C (4000°F). As the bullets plow through the clouds they leave behind distinctive tubular wakes (colored orange in this image). These wakes shine like bullet tracers due to the heated molecular hydrogen gas. The bullets are relatively young, with their ages estimated to be less than a thousand years since ejection.