Some Rare Abnormal Stars may have White Dwarf Parents to Blame

Astronomers have announced the discovery of huge quantities of an unusual variety of oxygen in two very rare types of stars. The finding suggests that the origin of these oddball stars may lie in the physics behind the mergers of white dwarf star pairs.

The unusual stars are known as hydrogen-deficient (HdC) and R Coronae Borealis (RCB) stars. Both types have almost no hydrogen - an element that makes up about 90% of most stars. Surprisingly, they contain up to a thousand times more of the isotope oxygen-18 than normal stars like our Sun. The discovery of abnormal quantities of oxygen-18 is based on near-infrared spectroscopic observations from the Gemini Near-Infrared Spectrograph (GNIRS) on the 8-meter Gemini-South telescope in Chile.

Prompted by the discovery, the team roughly simulated the nuclear reactions that would occur during a merger of two types of white dwarfs, an idea originally proposed for the origin of RCB stars in 1984 by Prof. Ronald F. Webbink (University of Illinois). According to Clayton conditions had to be just right to yield the oxygen-18 observed in these stars. "It's like the porridge in Goldilocks and the Three Bears. During the merger process, when nuclear reactions were taking place, the temperature was neither too hot, nor too cold, but just right for the production of large amounts of oxygen-18."

One of the challenges in understanding these stars is how oxygen-18 can be formed from nitrogen in the star while maintaining more normal amounts of the isotope oxygen-16 made from the star's preexisting carbon. 'It's really the ratio of oxygen-18 to oxygen-16 that is important and in these stars that ratio is very lopsided. Although we need to do more precise modeling, it appears that the white dwarf merger theory might just allow this to occur,' said Clayton.

RCB stars are a small group of carbon-rich supergiants that undergo spectacular declines in brightness at irregular intervals, typically a few years in duration, before returning to their initial brightnesses. It is now thought that carbon grains intermittently condensing in the gas ejected by the star are responsible for dimming the star's light. On the other hand, the HdC stars, although resembling the RCB stars in their elemental abundances, do not eject gas and thus do not make dust or appear to vary in brightness.

An alternative theory to the merging of white dwarf pairs, originally proposed by Icko Iben (University of Illinois), is that oxygen-18 rich stars could be formed when a single star on the verge of becoming a white dwarf undergoes a final flash of thermonuclear burning near its surface. This inflates the star to supergiant size and cools off its outer atmosphere.

'This final-flash model is a tempting explanation because two stars known as V605 Aquilae and Sakurai's Object have recently been discovered going through the final flash phase where they resembled RCB stars in abundances, temperature, and brightness,' said team member Geballe. 'However, both of these stars are now known to have spent only a few years in this phase and given this extremely short period as cool supergiants this makes it unlikely that they can account for even the small number of RCB stars currently known in the Milky Way Galaxy.' These stars are so rare that a total of only 55 HdC and RCB stars have been identified in our galaxy.

'The properties and antics of these weird stars have been the subject of intense observation and discussion for generations of astronomers,' said Geballe. 'This discovery should help us pinpoint how the combination of two degenerate stars is different than the sum of their parts.'

A pair of white dwarf stars in a close binary system are brought ever closer to each other, either by magnetic braking or gravitational wave emission, until one of the stars is disrupted and then merges with the other star. The gas becomes hot enough for nuclear reactions to take place. The energy produced causes the new merged star to expand and become a supergiant star, about a thousand times larger than the white dwarfs that formed it.

Gemini Artwork by Jon Lomberg, available at publication-quality resolution below.

The atom that we think of as oxygen has eight protons and eight neutrons and is called "oxygen-16" or 16O. This form of oxygen is by far the dominant form of oxygen everywhere throughout our Milky Way, it's found in interstellar clouds and distant stars, as well as on Earth and in the Sun. Two other stable forms of oxygen exist (isotopes), with one and two extra neutrons, known as oxygen-17 and oxygen-18 (17O and 18O). However, both of these isotopes are extremely rare. Our Earth, Sun, and most other stars and clouds in interstellar space studied to date have about 2700 times as much 16O as 17O and about 500 times as much 16O as 18O.

The unpredictable variability of RCB stars has made them popular targets for measurement by amateur astronomers and the source of much discussion by professionals seeking an explanation for their behavior. RCB star atmospheres are also extremely deficient in hydrogen, but very rich in carbon.

Two different evolutionary models have been suggested for the origin of RCB stars. Both theories invoke objects known as white dwarfs, the ultra-dense cores of previously normal stars like the Sun. They typically have masses about half that of the Sun, and their sizes are close to that of the Earth. In one model an RCB star is formed when two white dwarf stars merge. In the other model the RCB star is formed when a single star on the verge of becoming a white dwarf undergoes a final flash of thermonuclear burning near its surface, blowing the star up to supergiant size and cooling off its outer atmosphere.

In 1984 Prof. Ronald F. Webbink (University of Illinois) proposed that an RCB star is formed from the merger of a helium-rich white dwarf and a carbon/oxygen-rich white dwarf. He suggested that as the binary white dwarf coalesces into one object, the helium-white dwarf is disrupted, with part of it accreting onto the carbon/oxygen-white dwarf and undergoing thermonuclear "burning." The remainder forms an extended atmosphere around the object. Webbink proposed that this structure, a star with an He-burning outer shell in the center of a ~100 solar radii H-deficient envelope, is a RCB star.

Additionally, in 2002, Dr. Simon Jeffery (Armagh Observatory, Northern Ireland) and Dr. Hideyuki Saio (Tohoku University, Japan), suggested that a white dwarf pair merger could also account for the abundances of elements such as hydrogen, helium, carbon, nitrogen and oxygen seen in RCB stars. However, little is known about how the isotopes of these elements were created in these stars. 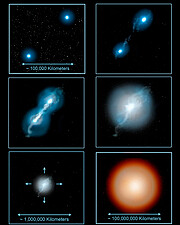 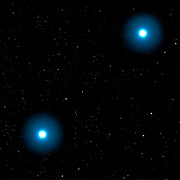 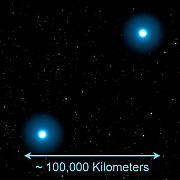 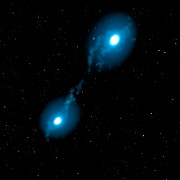 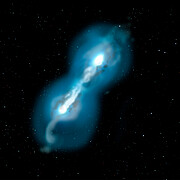 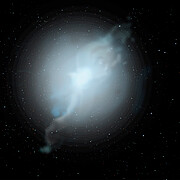 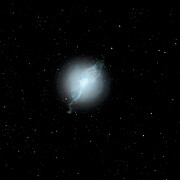 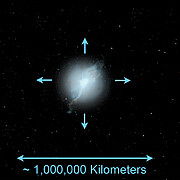 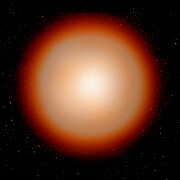 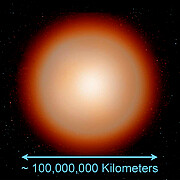