On January 18, 2002, the Gemini Observatory will celebrate a significant milestone with the dedication of the Gemini South telescope facility at the summit of Cerro Pachón, Chile. National and international media invitations are still available and journalists can reserve space upon request.

"This is not only a milestone for the Gemini Observatory, but for the entire astronomical community in the seven-country Gemini partnership," said Gemini Director Dr. Matt Mountain. "For the first time the entire sky is accessible to an 8-meter class observatory and also accessible to any astronomer within each of the Gemini partner countries." The Gemini South Telescope is located at an elevation of 2737 meters (8,895 feet) on Cerro Pachón, near Cerro Tololo and amid the striking scenery of the Chilean Andes.

Dignitaries from all seven of the Gemini Observatory partner countries are scheduled to attend and interviews will be offered following the ceremony. A final VIP guest list will be available to registered media by December 21, 2001 and requests for interviews must be received by January 11, 2002. A limited number of hotel rooms have been reserved for journalists but must be confirmed by December 15, 2001.

In addition to the formal dedication on Friday January 18, journalists will be invited to attend a dedication dinner on the evening of the 18th at the La Serena Club Resort and Conference Center. Sponsored by Lockheed-Martin, this dinner will feature keynote speaker Professor Malcolm Longair, head of the Cavendish Laboratory at the University of Cambridge, UK.

Additional media events will include:

Note: Ground transportation from La Serena to Cerro Pachón for all summit press activities will be provided for invited media.

The Gemini Observatory is an international collaboration that has built two identical 8-meter telescopes. The telescopes are located at Mauna Kea, Hawaii (Gemini North) and Cerro Pachón in central Chile (Gemini South), and hence provide full coverage of both hemispheres of the sky. Both telescopes incorporate new technologies that allow large, relatively thin mirrors under active control to collect and focus both optical and infrared radiation from space. Gemini North has begun science operations and Gemini South is scheduled to begin scientific operations in late 2001.

The Gemini Observatory provides the astronomical communities in each partner country with state-of-the-art astronomical facilities that allocates observing time in proportion to each country's contribution. In addition to financial support, each country also contributes significant scientific and technical resources. The national research agencies that form the Gemini partnership include: the US National Science Foundation (NSF), the UK Particle Physics and Astronomy Research Council (PPARC), the Canadian National Research Council (NRC), the Chilean Comisión Nacional de Investigación Cientifica y Tecnológica (CONICYT), the Australian Research Council (ARC), the Argentinean Consejo Nacional de Investigaciones Científicas y Técnicas (CONICET) and the Brazilian Conselho Nacional de Desenvolvimento Científico e Tecnológico (CNPq). The Observatory is managed by the Association of Universities for Research in Astronomy, Inc. (AURA) under a cooperative agreement with the NSF. The NSF also serves as the executive agency for the international partnership. 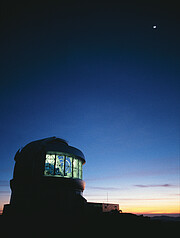