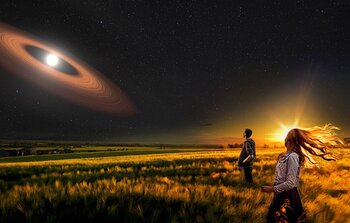 noao1904 — Organization Release
Citizen Scientists Invited to Join Quest for New Worlds
19 February 2019: The Backyard Worlds: Planet 9 project re-launches this week, with a call to volunteer citizen scientists to join the search for cold worlds near the Sun. With its newly revamped online interface and equipped with twice as much data as before, the project offers new opportunities to discover planets lurking yet unseen in the outer reaches of the Solar System (e.g., Planet 9, Planet X) as well as cold nearby “failed stars” (a.k.a. brown dwarfs). The re-launch coincides with the publication of the project’s latest discovery: a record-setting white dwarf star encircled by mysterious dusty rings that challenge astronomers to rethink the long-term evolution of planetary systems.
Read more 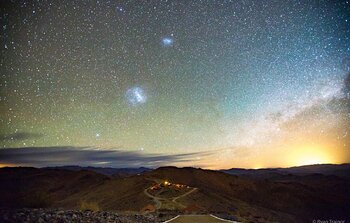 noao1903 — Science Release
Milky Way’s Neighbors Pick Up the Pace
22 January 2019: After slowly forming stars for the first few billion years of their lives, the Magellanic Clouds, near neighbors of our own Milky Way galaxy, have upped their game and are now forming new stars at a fast clip. This new insight into the history of the Clouds comes from the first detailed chemical maps made of galaxies beyond the Milky Way.
Read more 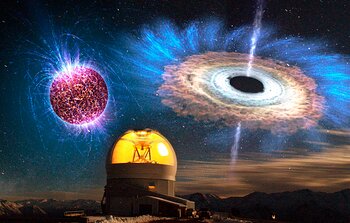 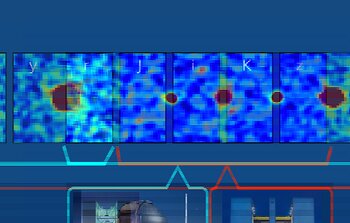 gemini1901 — Science Release
Cosmic Telescope Zooms in on the Beginning of Time
9 January 2019: Observations from Gemini Observatory identify a key fingerprint of an extremely distant quasar, allowing astronomers to sample light emitted from the dawn of time. Astronomers happened upon this deep glimpse into space and time thanks to an unremarkable foreground galaxy acting as a gravitational lens, which magnified the quasar’s ancient light. The Gemini observations provide critical pieces of the puzzle in confirming this object as the brightest appearing quasar so early in the history of the Universe, raising hopes that more sources like this will be found.
Read more 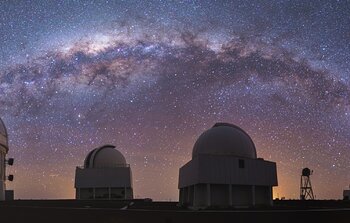 noao1901 — Science Release
NOAO: A Survey Machine and a Data Trove
8 January 2019: On the night of 9 January 2019, the V. M. Blanco 4-meter telescope at the National Science Foundation’s (NSF) Cerro Tololo Inter-American Observatory (CTIO), high in the mountains of Chile, will close the camera’s shutter on the final image from the Dark Energy Survey (DES) – a survey that has mapped 5,000 square degrees of the heavens, almost one-quarter of the southern sky. Although the survey is ending, both the camera used in the survey and the survey data itself are expected to continue to yield abundant new discoveries.
Read more
Showing 21 to 25 of 25
Usage of NOIRLab Images and Videos
Are you a journalist? Subscribe to the NOIRLab Media Newsletter.