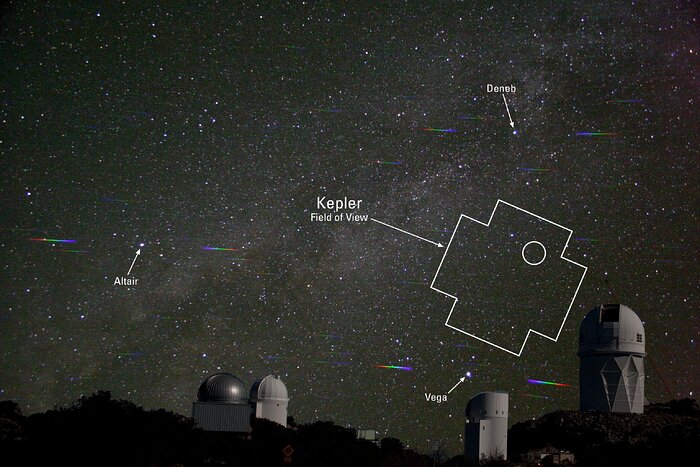 This composite image taken at Kitt Peak National Observatory outlines the Kepler satellite field of view, and within it, a circle marks the location of the faintest Kepler Mission host star yet, a G8 dwarf star harboring a 1.12 Jupiter-size exoplanet in a 3.9 day orbit. (reported by Howell et al in the Astrophysical Journal, accepted for publication in October, 2010) Ground-based confirmation of this planet involved three different telescopes on Kitt Peak: the 2.1-meter, the 4-meter and the WIYN telescope. About the picture: The sky was photographed using a diffraction grating (Glaspey): spectra are visible on either side of the bright stars, the telescopes were imaged separately (Marenfeld) and later combined with the sky image. The sky image was taken with a Canon Digital Rebel using an 18 mm lens with a diffraction grating filter to create the spectra. The exposure was 122 sec at f/4.0 using ISO 1600.