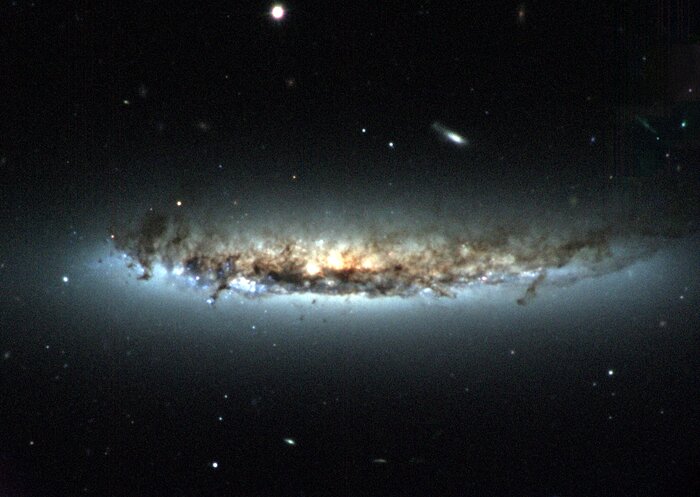 This three-color composite image of spiral galaxy NGC 4402 shows several key lines of evidence for the galaxy being stripped bare of its star-forming material by its violent ongoing encounter with the hot gas in the center of the Virgo galaxy cluster, as NGC4402 falls into it. First, the galaxy’s dust disk appears to be truncated; second, the dusty disk appears to be “bowed” upward, bent by the wind of hot gas blowing from the southeast (from the lower left of the image); third, it appears that the light emitted by the north side of the stellar disk has been reddened and dimmed by dust that has been pushed up in front of it by the pressure of the cluster gas; and fourth, the linear filaments of dust to the south of its main disk are being “ablated,” or stripped away, in an outside-in fashion. This extremely disruptive process is believed to be a major influence on the evolution of galaxies and their star-forming ability over time. See NOAO Press Release 04-06 for more information. The image was taken at the WIYN 3.5-meter telescope on Kitt Peak using the WIYN Tip-Tilt module, an adaptive optics device that uses a movable mirror to provide first-order compensation for the jittery motion of the incoming image caused by variable atmospheric conditions and telescope vibrations.