SOAR Below the Milky Way 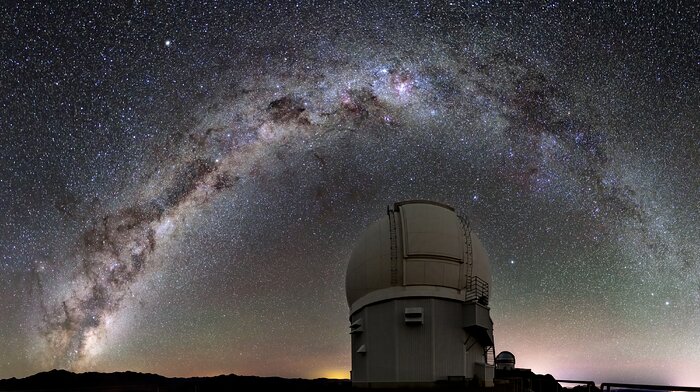 This Image of the Week captures the Milky Way arching over the SOAR Telescope of Cerro Tololo Inter-American Observatory (CTIO), a Program of NSF’s NOIRLab, on Cerro Pachón in Chile. The SOAR (Southern Astrophysical Research) Telescope was initiated by the University of North Carolina at Chapel Hill in the United States. Nineteen years in the making, SOAR saw first light in 2006. Today, the Brazilian and American governments along with two American universities operate and maintain SOAR. Consortiums, like the one for SOAR, allow more astronomers around the world to access state-of-the-art technology while encouraging collaboration between researchers in different countries.

To the right, behind SOAR, is Gemini South, one half of the International Gemini Observatory, operated NSF’s NOIRLab. Gemini South is a short walk away — 400 meters (0.25 miles) — from SOAR.