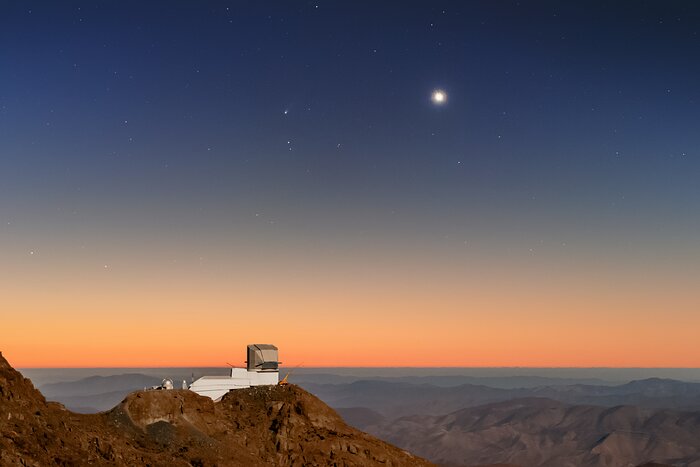 Comet Leonard (C/2021 A1) has been beautifully captured soaring above Vera C. Rubin Observatory, a Program of NSF’s NOIRLab, in this early-evening Image of the Week taken in December 2021. The diffuse tail of Comet Leonard marks it apart from the stars, just left of center in the upper third of this image. Like other comets, its twin tails flow away from the Sun, as the solar radiation boils the icy body which then releases streams of dust and gas into space. Comet Leonard, which has an orbital period of 80,000 years, was the first comet discovered in 2021. Outbursts of gas since it was first observed and forward scattering of its reflected light also made it the brightest comet observed in 2021. It reached perihelion, its nearest distance to the Sun, on 3 January 2022. Unfortunately that was its last close approach to the Sun, as its current trajectory and velocity mean Comet Leonard is now escaping the Solar System!

In this image, shining brightly to the right of Comet Leonard is the planet Venus while down on Earth is Rubin Observatory, in its last stages of construction, perched on the Cerro Pachón ridge in north-central Chile. Rubin Observatory is a joint initiative of the National Science Foundation and the Department of Energy (DOE). Once completed, Rubin will be operated jointly by NSF’s NOIRLab and DOE's SLAC National Accelerator Laboratory to carry out the Legacy Survey of Space and Time.

You can also see Comet Leonard in an earlier Image of the Week here.