The Comet, the Planets, and the Sprite 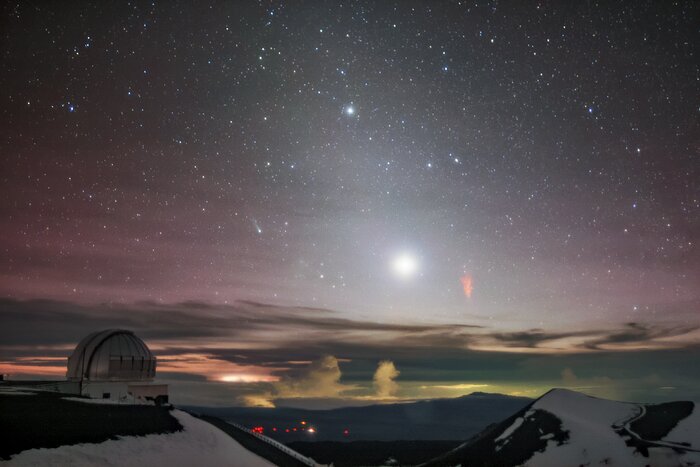 This NOIRLab Image of the Week was captured soon after sunset less than 36 hours ago, on the night of Monday 20 December 2021, at Maunakea, Hawai‘i. It was taken by our Cloudcams at Gemini North, one half of the international Gemini Observatory, a Program of NSF’s NOIRLab. Gemini North sits at an altitude of around 4200 meters (13,800 feet). Not only does this altitude facilitate world-class astronomical observations, but it also provides a phenomenal vantage point from which to spot various exciting light phenomena and night-sky wonders. In just one shot, this scene captures several phenomena: the naked-eye Comet Leonard (left of center), a red sprite (right of center), faint red airglow (left), Venus (the brightest feature), and Saturn (top).

One of the rarest phenomena shown in the image, red sprites shoot down from a height of between 50 and 90 kilometers (30–55 miles) toward the top of the cloud deck over a lightning storm. It is uncommon to capture these phenomena on camera, but the uniquely clear sky and unique perspective from Maunakea increase the chances of capturing this flighty phenomenon. Another red sprite was captured from the same location in 2017 and can be seen in this image.