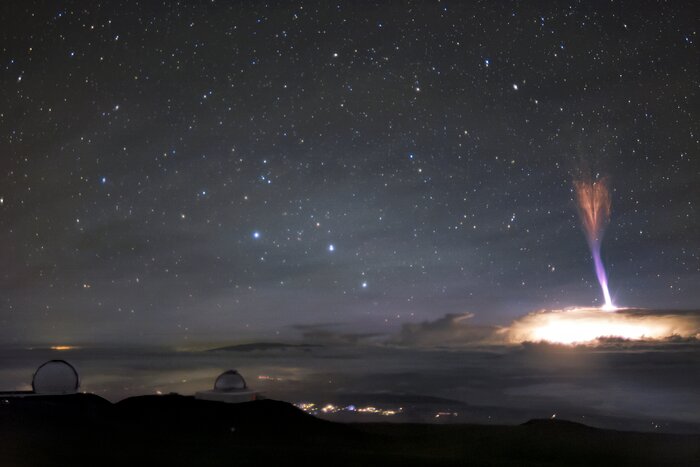 The telescopes at Maunakea sit calmly beneath a sky filled with extraordinary light. Amongst these telescopes is Gemini North, the northern member of the international Gemini Observatory, a Program of NSF’s NOIRLab. Gemini North sits at an altitude of around 4200 meters (13,800 feet). Not only does this altitude facilitate world-class astronomical observations, but Gemini North’s nighttime Cloudcams were able to capture the extraordinary light phenomena seen on the right side of the image.

The column of blue and red lights surrounded by a bright blaze of white light appears so otherworldly that it looks like it must be a special effect. This breathtaking image, however, is entirely real. It features the lightning phenomena named a red sprite.

Red sprites are distinctive because of their color, and also the direction in which they strike. The red and blue lights are shooting down from 50-90 kilometers toward the top of the cloud deck. It is extremely rare to capture these phenomena on camera and even more so from this unique perspective.