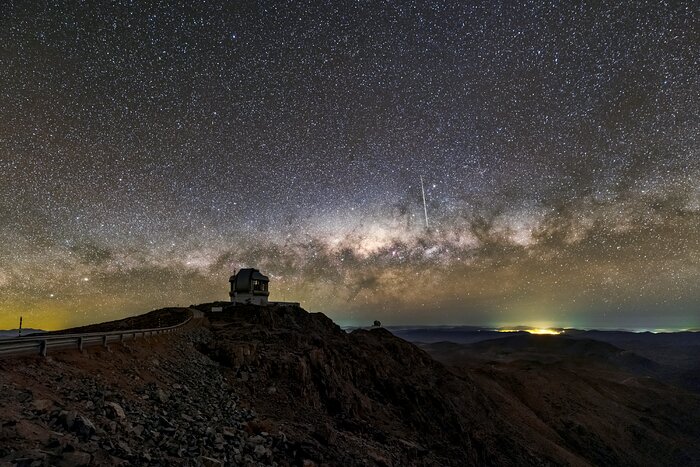 The Milky Way seems to hover above the horizon in this image from Cerro Pachón in the Chilean Andes, and the galaxy appears to have been sliced through by the streak of light left by a meteor. The starry sky silhouettes Gemini South, the southern half of the international Gemini Observatory, a Program of NSF’s NOIRLab. Gemini South and its northern twin, Gemini North, each house a 8.1-meter-diameter telescope. The twin telescopes are located at two of the best observing sites on the planet (Gemini North is situated on the peak of the dormant Hawaiian volcano Maunakea).

This image also captures the profile of Vera C. Rubin Observatory, which is currently under construction on Cerro Pachón; the minuscule outline of one of the cranes being used to build the telescope is just visible next to the unfinished dome. Once complete, Vera C. Rubin Observatory will use its 8-meter telescope and 3.2-gigapixel camera to conduct an unprecedented, decade-long survey of the night sky — surveying the entire visible southern sky every few nights.