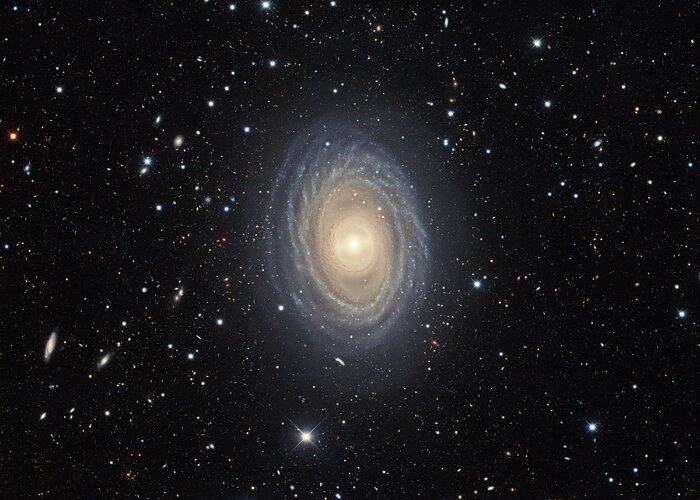 This image captures the spiral galaxy NGC 1398, which lies roughly 65 million light-years from Earth in the constellation Fornax. NGC 1398 is a barred spiral galaxy, and both its bright central bar and delicate spiral arms are clearly visible in this image, with the galaxy itself seemingly adrift and alone in a field of stars. Upon closer inspection, however, the sky around NGC 1398 is teeming with the smudges and whirls of distant galaxies.

This deep portrait of NGC 1398 and its neighborhood was captured by the Víctor M. Blanco 4-meter Telescope at Cerro Tololo Inter-American Observatory (CTIO), a Program of NSF’s NOIRLab. In 1995 the telescope was named in honor of Puerto Rican astronomer Víctor Manuel Blanco, the second director of CTIO. Today, the telescope is a high-performance astronomical workhorse, providing astronomers with detailed observations over a wide field of view.

The image was taken as part of the Dark Energy Survey (DES), funded by the DOE, with one of the highest-performance, wide-field CCD imagers in the world, DECam, built and tested at DOE’s Fermilab.