Portrait of the Great Barred Spiral 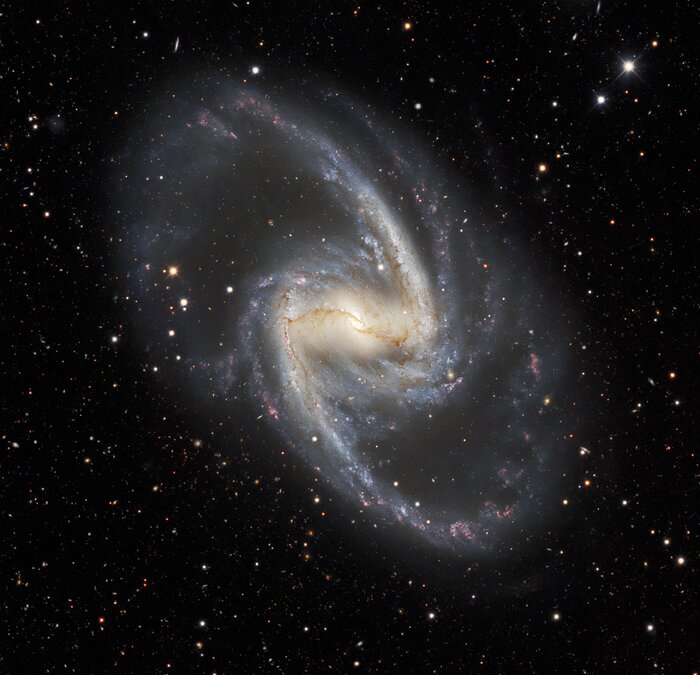 This image captures the elegant galaxy NGC 1365 in the Fornax Cluster of galaxies. Also known as The Great Barred Spiral Galaxy, NGC 1365 is a strikingly perfect example of a barred spiral galaxy. This image shows the galaxy’s prominent bar and its graceful spiral arms, with lanes of dust obscuring the extended diffuse glow of stars. The central bar of NGC 1365 influences star formation throughout the entire galaxy and conceals a supermassive black hole hidden behind multitudes of newly formed stars. Astronomers are interested in barred spiral galaxies like NGC 1365 for more than just their elegance — these galaxies provide insights into our home galaxy, the Milky Way, which is also a barred spiral galaxy.

This image was built up using data from the Dark Energy Survey (DES), an ambitious project which mapped hundreds of millions of galaxies across the Universe using the Dark Energy Camera (DECam) on the Víctor M. Blanco 4-meter Telescope at Cerro Tololo Inter-American Observatory (CTIO). The analysis of data from the Dark Energy Survey is supported by the Department of Energy (DOE) and the National Science Foundation (NSF), and the DECam science archive is curated by the Community Science and Data Center (CSDC) at NSF’s NOIRLab. Cerro Tololo Inter-American Observatory and CSDC are Programs of NOIRLab.

One of the highest-performance, wide-field CCD imagers in the world, the 570-megapixel DECam was designed specifically for the DES and operated by the DOE and NSF between 2013 and 2019. DECam was funded by the DOE and was built and tested at DOE's Fermilab. At present DECam is used for programs covering a huge range of science.