The Cosmic Jewels of Sextans A 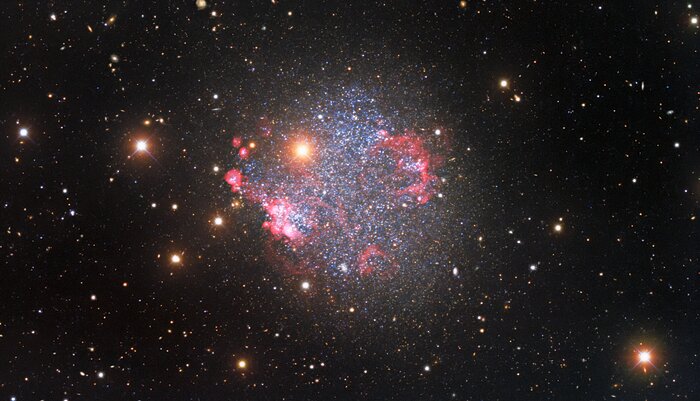 This glittering image captured by the Nicholas U. Mayall 4-meter Telescope at Kitt Peak National Observatory, a Program of NSF’s NOIRLab, shows the irregular dwarf galaxy Sextans A, which lies around 4.4 million light-years from Earth. This galaxy, which is only a fraction of the size of the Milky Way, has been contorted by successive waves of supernova explosions into the roughly square shape we see from Earth — a cosmic jewelry box filled with bright young stars.

Sextans A is displayed in style in this gorgeous image, which showcases the irregular shape of this dwarf galaxy. Irregular galaxies such as Sextans A don’t have the regular appearance of spiral or elliptical galaxies, but instead display a range of weird and wonderful shapes. These galaxies are relatively small, and they are often susceptible to distortions resulting from close encounters or collisions with larger galaxies — sometimes leading to their irregular shapes. Sextans A is particularly small, measuring only about 5000 light-years across.

Also watch this video for more insights about the image.