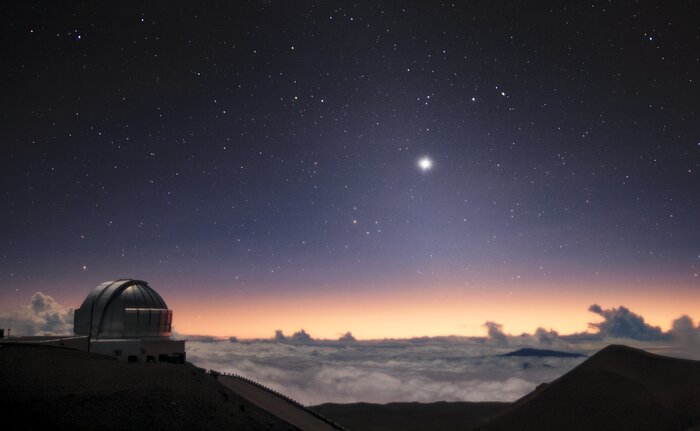 In December 2020 Jupiter and Saturn appear closer in the sky to one another in the nighttime sky than they have for 800 years! Seen from Earth, Jupiter and Saturn seem to be on top of each other, but the two planets are actually 734 million kilometers (456 million miles) apart. An event such as this, when the two largest gas giant planets in our Solar System pass close to each other in the sky, is known as a great conjunction. The closest point in this conjunction coincidently fell on the Winter Solstice on 21 December, similar to the great conjunction of 7 BC — one of several possible explanations for the origin of the Star of Bethlehem.

This photo was taken on 20 December at 07:12 pm HST with the Gemini North weather camera on Maunakea on the island of Hawai‘i. Gemini North is part of the international Gemini Observatory, a program of NSF’s NOIRLab. While Jupiter and Saturn may have appeared to the naked eye as one bright star over the South Western horizon, they were in reality about one-tenth of a degree apart. The faint glow of the zodiacal light can also be seen stretching down to the horizon.