Heart of the Crab 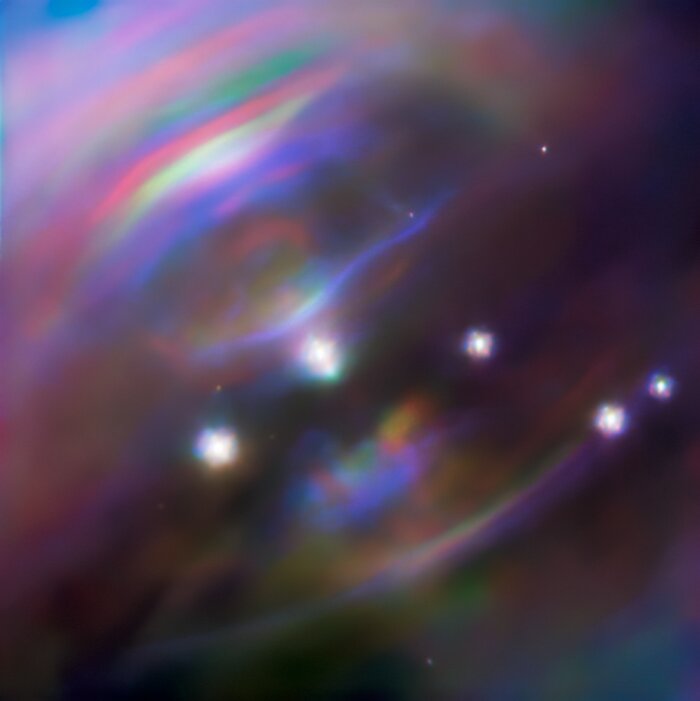 In the heart of the Crab Nebula (Messier 1) a neutron star is rotating 30 times every single second. This pirouetting star, known as the Crab Pulsar, consists purely of neutrons, and has an intense magnetic field which ejects jets of material from its poles at nearly the speed of light. The Crab Pulsar has a mass about one and a half times that of our Sun, yet all this mass is packed into a sphere only 28 km (17 miles) in diameter — roughly the size of Mars’s small moon Phobos.

The wispy structures shown in this image are caused by material flowing equatorially outwards from the pulsar and careening into the surrounding nebula. These dynamic features, known as termination shocks, move and change shape as outflow from the puslar ebbs and flows.

This changeability is showcased by this composite image, which is a compilation of three Gemini North observations taken over a 5-year period at the same infrared wavelength: observations from October 2009 are shown in blue and observations from December 2014 are shown in red. This color coding of the observations produces a striking rainbow effect highlighting the high speed motion of the termination shocks, which have noticeably changed position between observations. Gemini North on Maunakea, Hawai‘i, is one of the pair of telescopes that make up the international Gemini Observatory, a Program of NSF’s NOIRLab.